Obama: 'Justice Will Be Served' on ISIS for U.S. Journalist's Killing

President Barack Obama vowed Wednesday the U.S. will bring to justice the Islamist militant group that executed a second American journalist on camera this week.

“We will not be intimidated” by the killing of journalist Steven Sotloff, he said, while speaking to reporters in Estonia. “Those who make the mistake of harming Americans will learn that we will not forget and that our reach is long and that justice will be served.”

The extremist group released a graphic video that showed the brutal execution of Sotloff, just two weeks after a similar video surfaced and depicted the execution of James Foley, another American freelancer who had been missing in Syria.

In a statement on Wednesday, National Security Council spokeswoman Caitlin Hayden said the U.S. intelligence community had analyzed the footage and “reached the judgment that it is authentic.”

But Obama offered a muddled vision for taking on the Islamic State of Iraq and Greater Syria (ISIS), first saying the U.S. objective is to “degrade and destroy” the group, before saying his strategy is to contain the threat, rather than seeking to eliminate the group entirely.

“Our objective is clear, and that is to degrade and destroy [ISIS] so that it’s no longer a threat not just to Iraq but also the region and to the United States,” Obama said.

But moments later the president said wiping out the extremist group, which has taken over large swaths of Iraq and Syria, is not an achievable goal, but that the U.S. can still mitigate the threat it poses. “Our objective is to make sure that [ISIS] is not an ongoing threat to the region,” Obama said. “And we can accomplish that.”

The commander-in-chief added that it was unrealistic to expect that the entire organization can be dismantled. “As we’ve seen with al-Qaeda, there are always going to be remnants that can cause havoc,” he said.

Seeking to clean up much-criticized comments last week that he had “no strategy” in place for tackling ISIS, Obama said he was “specifically referring” to civil war-torn Syria and not Iraq. “What we have seen is the strategy that we’ve laid out moving effectively,” he explained of his administration’s efforts in Iraq, where U.S. forces have conducted 124 airstrikes and more than 1,000 American ground troops are protecting U.S. diplomatic facilities and advising Iraqi and Kurdish troops.

Even so, Obama cautioned that the campaign against ISIS will take time. “This is not going to be a one-week or a one-month or a six-month proposition,” he said.

Warning that “threats evolve,” Obama emphasized the need for a regional and global effort to take on the extremist group, noting he has tasked key aides with building an international coalition to that end.

With international help, Obama said, it’s possible to shrink ISIS “to the point where it’s a manageable problem.” 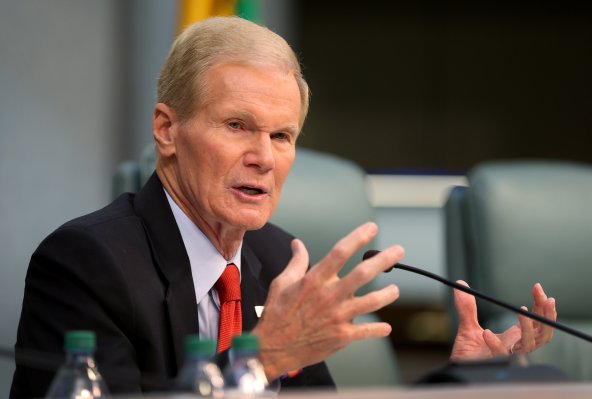 Senator Urges Anti-ISIS Strikes in Syria
Next Up: Editor's Pick