An Army Wife Mourns the Day Her Husband Dreamed His Death

My husband Miles dreamed of his death in the fall of 2005, nine months before he deployed to Iraq. He was 23 years old.

He told me about the dream on a Saturday morning as he dressed for work at Fort Hood, and I listened from the bed while he pawed through the fatigues hanging in the closet.

“Our helicopter crashed,” he said.

He took a pair of camouflage pants off a metal hanger, shook them out by the waistband, and stepped in one leg at a time.

“John Priestner and me.”

Already the Texas day was warm and our air conditioner chugged an unconvincing stream of cool air. I squinted at Miles as he talked, trying to shake the sleep from my brain, while he disappeared back into the closet and returned with the jacket to his uniform.

“We floated above the helicopter,” he said, “while it burned to the ground.”

He pulled a pair of socks out of the dresser and sat on the edge of the bed. He turned to look at me, and I laid a hand on his cheek. He covered my hand with his, and we sat for a time without speaking. Then he pulled on his socks, laced up his boots, and walked into the living room. I heard the metallic clink of his dog tags slipping around his neck. The front door opened and a shaft of sunlight spilled in. The door closed and I was alone.

The late-morning sun slanted through the windows when I awoke the second time that day. I pushed back the comforter and swung my feet to the ground, working out the stiffness in my back. In the bathroom, I brushed my teeth and leaned closer to the mirror to get a good look at the bottom row. How is it that despite a lifetime of good orthodontics my teeth could already be sliding together? I inspected where they jostled for space behind my lower lip, then shifted my eyes to the window over the shower where the light streaming in made me blink. I felt old for 24.

The AC unit in the living room cranked and cranked, but the sun radiated a heat that was palpable in the small space of the apartment. I felt it on the couch as I spooned cereal into my mouth, felt it in the kitchen as I rinsed my bowl, felt it is as I walked into the shadows of the bedroom to put on real clothes. When I had dressed, I turned on the television and opened the front door. A car playing Kanye West’s “Gold Digger” cruised past. On the TV, a news report from New Orleans gave an update on the wreckage from Hurricane Katrina. I changed the channel until I found Judge Judy lecturing a plaintiff about courtroom manners. The man gripped the edge of the podium and shook his head, and I lay on the couch and wondered what to do with the long hot hours of the day.

In the late afternoon, I stood in the kitchen with my hands on my hips, surveying. I owned four wooden spoons, a complete silicone bakeware set, and—somewhere packed away in the boxes from college—a laminated copy of the National Organization for Women’s feminist manifesto. Because a woman’s work is never done, it began. After a long minute, I pulled down a set of mixing bowls. I stirred together cornmeal and oil and eggs, filled two muffin tins I’d inherited from my grandmother, and slipped the trays in the oven. While I moved through the kitchen, looking for oven mitts, setting the hot pan on the stove, I sensed the air in the room change, a subtle shift I felt first with the fine hairs on my arms.

I turned to the open doorway and there was Miles, his hair plastered to his forehead, his rucksack slung over one shoulder. He dropped the bag and stepped into the kitchen. He smiled, and I smiled, and then he had his arms around me. I breathed him in—the fabric of his Army fatigues, the mechanical grease on his hands, the soap smell still on his neck. He stepped back. “Are those corn muffins?” I smiled and my cheeks glowed. He popped a muffin out of the tin with a knife and took a bite as he headed into the bedroom, shedding his uniform, last night’s dream already forgotten.

But I did not forget. I thought of the dream often as the unit counted down to the deployment. In the mornings, the sound of artillery from the base rumbled long and low, and I imagined distant thunderheads as I lay beside Miles in the smoke-colored light of dawn. Sometimes I placed a hand on his back while he slept. I faced into his sleeping form and turned the dream over in my head. I took it as a warning, an admonition to care for Miles well. If I loved him enough, I reasoned, he would come home. 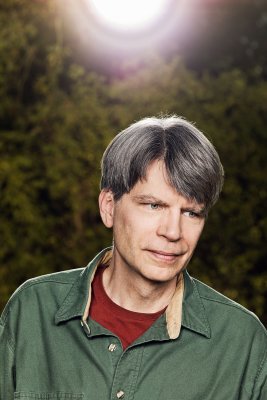 The Man Who Loved Music Too Much
Next Up: Editor's Pick