President Barack Obama authorized the deployment of another 350 American service members to Baghdad on Tuesday evening, the White House announced, bringing the number of American troops deployed to Iraq since June to over 1,000.

White House press secretary Josh Earnest said in a statement that the 350 U.S. troops are tasked with protecting American diplomatic facilities and personnel in Baghdad, which has been under threat from the spread of the Islamic State of Iraq and Greater Syria (ISIS).

“This action was taken at the recommendation of the Department of Defense after an extensive interagency review, and is part of the President’s commitment to protect our personnel and facilities in Iraq as we continue to support the Government of Iraq in its fight against [ISIS],” Earnest said. “These additional forces will not serve in a combat role.”

The announcement was unrelated to the release of an ISIS video Tuesday purporting to show the beheading of American journalist Steven Sotloff.

Pentagon press secretary Rear Admiral John Kirby said 405 American service members will be deployed to Baghdad, while 55 who have been there since June will be redeployed elsewhere in the region. About 820 American troops are engaged in the protection mission in Iraq, which was authorized by Obama in June, while hundreds more are serving in an advisory role to Iraqi and Kurdish forces battling ISIS.

The U.S. has also conducted 124 air strikes in Iraq, most to assist Iraqi forces in retaking the key Mosul Dam from ISIS control, with a strike Tuesday damaging or destroying 16 ISIS armed vehicles, according to U.S. Central Command.

The Obama Administration is contemplating expanding the air campaign against ISIS in Iraq and into Syria, but no decisions have been made yet according to officials. Separately, Secretary of State John Kerry, Secretary of Defense Chuck Hagel and Obama counterterrorism adviser Lisa Monaco are traveling to the region in the coming weeks to build a coalition to take on the extremist group. 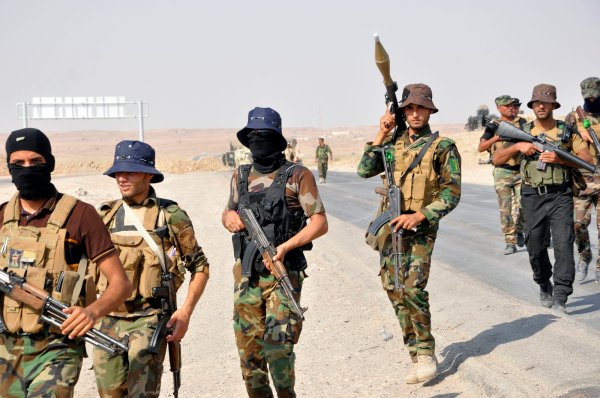 Don't Wage War Against ISIS Like Iraq
Next Up: Editor's Pick