The advertisement described by TIME in the paragraph above aired only once, 50 years ago, on Sept. 7, 1964.

It’s a minute long and appeared during Monday Night at the Movies on NBC. This is what happens next, as TIME described it: The countdown ends, and the screen erupts in atomic explosion, followed by the voice of Lyndon Baines Johnson, who says somberly: “These are the stakes: to make a world in which all of God’s children can live, or go into the dark. We must either love each other or we must die.”

The commercial, an election-season spot for incumbent president LBJ, was never meant to run repeatedly, but it was followed later in the month by a similar commercial featuring another little girl, this time with an ice cream cone, accompanied by an ominous voiceover about radioactive chemicals introduced to the environment by nuclear tests. Still, the spots provoked immediate controversy — and contributed to TIME’s decision to dub the Sept. 25, 1964, issue “The Nuclear Issue.” (The daisy girl appears on the cover.) Republican presidential nominee Barry Goldwater, TIME said then, was dogged by an “itchy-finger image.” After speaking in favor of making it easier for the nation’s armed forces to use nuclear weapons if needed, Goldwater became synonymous with the threat of full-on nuclear destruction. As one registered Republican from Vermont told a reporter, “I don’t think too much of President Johnson, but I guess I’m really afraid of Senator Goldwater.”

Nuclear weapons became the central issue of that year’s campaigns, but — as TIME reported — neither side had 100% of the facts straight. On the one hand, Johnson’s strenuous insistence that he would never delegate the authority to launch nuclear weapons ran contrary to the procedures already established by the Joint Committee on Atomic Energy. NATO’s supreme commander in Europe already had the right in certain situations to cross the line from convention to nuclear weaponry. (Today, as TIME explained as part of the Answers Issue that arrived on news stands earlier this month, a minimum of two people are needed to launch a nuclear weapon in the U.S.) On the other hand, Goldwater’s claim that soldiers on the ground could operate small hand-held nuclear weapons ignored the fact that no such weapons existed. As explained by the diagram below, the smallest nuclear weapon the U.S. had, the Davy Crockett, weighed over 100 pounds and had a range of up to 2.5 miles, with enough power to destroy a bridge or up to 50 tanks. And after that the weapons quickly get much more powerful.

Johnson’s misstatements, however, didn’t matter in the long run. He won the 1964 presidential election in a landslide victory — and the fear-provoking TV ads that ran only once went down in history as some of the most infamous, and most effective, political spots ever.

Watch both of them below: 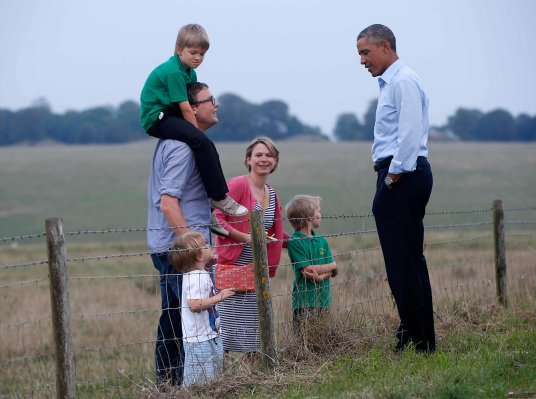 This British Family Hiked to Stonehenge to Take a Selfie With Obama
Next Up: Editor's Pick