Fred Phelps, a colossal jerk, died Thursday in Topeka, Kansas, at 84, after a long life in which even his few admirable achievements (a series of civil rights cases that he filed as an attorney) stemmed from a deeply disagreeable personality (he loved to pick fights with his neighbors). He was the kind of person no one wanted to be around: a lawyer disbarred by his colleagues, a preacher disowned by every denomination he ever espoused, a father rejected by his children—even, in the end, the children who emulate his worst characteristics.

Ordinarily, such an unpleasant and despicable man would not make much of a stir by dying. But Phelps was different from the garden-variety grinch in one important way: He had a thirst for notoriety and a genius for getting it.

His so-called Westboro Baptist Church—which was not in any meaningful sense “Baptist” or even a “church”—was a brutal but highly effective tool for compelling the attention of the world’s media. For most of the history of Westboro, it had few, if any, members beyond Phelps’s own family, which (according to at least one of his sons) the “pastor” kept in line with fists and a club.

But Phelps understood that the engine of news is conflict, and the sharper the conflict, the better. So he made a life of showing up at newsworthy events to shout vile abuse and attack innocent people he had never met. By bringing his family along, he gave the impression of numbers, and by calling this vile façade a “church,” he tapped into poisonous millennia of religious conflict to turbocharge his egomania. A man waving a sign that says “I Hate Fags” is pathetic; a man waving a sign that says “God Hates Fags” is news.

As a reporter and editor in some big newsrooms over the past 30 years, I watched as one journalist after another took Phelps’s bait, then tried to spit out the hook once the dishonesty and shabbiness of the man’s enterprise grew clear. You could fill a gymnasium with the scribes who swore off coverage of Westboro over the years. The only problem was, new and naïve reporters were being minted all the time, ready to believe that Phelps represented some larger darkness beyond the pit of his own person.

Ultimately, however, even Phelps could not keep this going forever. Westboro has been caught between two forces. One is the small group of journalists who went beyond the inflammatory picket lines to show the Phelps family as it really is: representative of nothing more than their own dysfunction. The other is the larger community of decent individuals who decided to give the media another, fresher story. Starting with the motorcycle riders of the Patriot Guard and quickly spreading to high schools, college campuses, and legitimate churches, a movement arose to build human walls between the Phelpses and the cameras. Though the family has tried desperately to regain its leverage by picketing celebrities, in fact, its day is done. The clan is devouring itself from within: even Fred was “excommunicated” in his last days.

This is the bright side of a gloomy life, and the reason not to despair over a life like Fred Phelps’s. Such a man can bend, but not break, the spirit of an open society. Too many spotlights were cast in his direction, but at least they illuminated his fall. 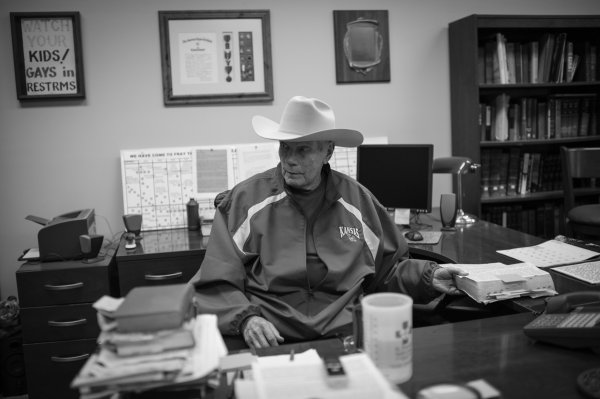 Fred Phelps and the People He Left Behind
Next Up: Editor's Pick