In 2010, when the San Francisco 49ers’ brain trust was drawing up the plans for what is now Levi’s Stadium, they went to one of the tallest buildings in the area and looked out over Silicon Valley.

According to Joanne Pasternack, director of community relations and the 49ers Foundation, these executives could see Google, Intel, Apple, HP, Facebook and many of the leading tech companies in the world laid out right in front of them.

It was at that point that they made the commitment to somehow use the new stadium to help create tech leaders of tomorrow. As one of the 49ers execs told me recently, they wanted to “help develop the people who will someday engineer and create greater features for Levi’s Stadium and develop innovative technologies that can impact the planet in the future.”

The 49ers have had a long history of supporting education. “Our family has always been interested in education,” said Dr. John York, co-chairman of the San Francisco 49ers. “My father-in-law, Ed DeBartolo, Sr., always felt that if you could give people an education, they can make a way for themselves and their lives. And the 49ers Foundation’s mission has been to keep kids safe, on track and in school.”

“My mother was a school teacher, my father was the son of Italian immigrants,” said Denise DeBartolo York, co-chairman of the San Francisco 49ers. “They always thought that education could level the playing field with at-risk students that were disadvantaged. Once you enable them to get an education, it’s an even playing field.” Mrs. York also told me that she and her husband, Dr. York, have contributed significantly to various underprivileged children’s causes and Title I school initiatives, as well as programs for at-risk kids.

The 49ers organization’s philanthropic contributions — much of which is focused on education — are at least $3.3 million per year. For years, the organization has supported what is called the 49ers Academy in East Palo Alto, CA. According to the academy’s website:

However, what they are doing in STEM education at Levi’s Stadium itself is amazing. STEM stands for Science, Technology, Engineering and Math and is a dedicated educational program to get kids interested in these disciplines, eventually guiding them into related career endeavors.

“On and off the field, talent alone will not lead to success,” said Dr. York. “The game changer for promising future leaders is to provide a stimulating environment where their natural talent and drive will be fed by motivating mentors, meaningful activities and academic enrichment. The 49ers STEM Leadership Institute’s vision is to be a leader in STEM education, preparing and inspiring talented learners to meet the challenges of the global society through innovation, collaboration and creative problem solving.”

The 49ers STEM Leadership Institute program will bring 20,000 students to Levi’s Stadium for daylong programs that tie sports and education around the STEM focus. Each day during the school year, 60 kids from one of the various schools in the Bay Area are brought to Levi’s Stadium in one of the 49ers’ official team buses. They are then broken up into three different groups of 20 each to rotate through three distinct activities.

The first activity features a full tour of the stadium, focusing on the engineering involved with creating a stadium. It shows off the green aspects of the stadium, including a visit to the garden on the roof as well as a look at the solar panels and how they’re used to create energy. The tour also demonstrates how clean technology is used to irrigate the field in order to care for the grass and turf. The kids also get to see the visiting team’s locker room, the field and many of the public areas of the stadium.

The second activity takes place in the new 49ers Museum and includes lessons using various games and interactive screens. Students learn how engineering and math are used to create 49ers football equipment, and how physics is applied to things like passing, kicking and running. The day I was there, they also included a section on careers in math and science. By the way, a trip to the 49ers Museum is highly recommended. It’s one of the best sports museums in the U.S. They use Sony Xperia tablets and various technologies to really enhance the overall museum experience — and for those of us in the Bay Area, it evokes some great memories of five 49ers Super Bowl wins.

The third activity takes place in an actual high-tech classroom that’s built into the new 49ers Museum. This classroom has multiple screens as well as half a dozen touch-based video worktables created by Cortina Productions. They serve as interactive teaching tools that the students can use to do various projects.

I was privileged to attend the inaugural class where they were studying the engineering principles of making a football. Using all of the materials needed to make a football, each group got to assemble a football from scratch, sew it up, inflate it and then test it in a special kicking area where the students could see how each ball performed based on how well they created it.

Many of the 49ers star players become the students’ tutors and team captains via video at each workstation table, giving instructions and encouragement for each project.

The interactive lessons vary: One class might teach how a helmet is engineered. Another might be on the physics of throwing a ball, explaining how a physical object like a football deals with airflow, throwing mechanics and force, and how each impacts the direction and length of a throw. There are even lessons on engineering your plate, including nutrition facts and a fitness class that uses the 49ers’ training camp as an example.

The class on applied mathematics explains angular attack and game geometry as well as teaching about statistics, using the Super Bowl and its various Roman-numeral numbering schemes as part of the lesson plan. All lessons are designed to emphasize how math, science, technology and engineering are used in everything from building a stadium to creating sports equipment to the math and physics that go into playing the game of football.

The teacher of the class is Matt Van Dixon, who is the education program manger for the 49ers Museum. Matt is one of the most dynamic teachers I have ever observed, his teaching style grabbing the kids from the beginning of each class. I was extremely impressed with how he developed the lesson plans to integrate the role of engineering and math into all of the sports examples. He and his team created various simulations to make the class interactive and highly entertaining. I asked a couple of kids who were in this inaugural class what they thought about the program and each gave it a huge thumbs up.

The 49ers STEM Leadership Institute has also been implemented in the Cabrillo Middle School in Santa Clara, CA, which is just down the street from Levi’s Stadium. With the 49ers’ support and big help from the Chevron Corporation, who created the STEM labs at the school, 60 students from the Santa Clara Unified School District are selected each year to go through a six-year program designed to inspire and prepare students with high academic potential to pursue STEM majors at top-tier universities and become future leaders in their fields. In addition to enriched math and science instruction, students have regular access to the Chevron STEMZone, a tech lab equipped with a laser cutter, 3D printers and other fabrication tools.

Steve Woodhead, Chevron’s global social investment manager, told me that when the 49ers approached them to help with the STEM Institute, they were glad to be involved and worked hard to create the learning labs used in these special education programs.

Another important partner in this program is the Silicon Valley Education Foundation. SVEF’s charter is to be a resource and advocate for students and educators. They provide advocacy, programs and resources to help students reach their full potential in the critical areas of science, technology, engineering and math. According to Muhammed Chaudhry, president and CEO of SVEF, his non-profit group played an important role in advising the 49ers and Chevron on STEM studies and helped with the development of the curriculum used in the institute’s educational programs.

What the 49ers are doing is using sports — a subject that most kids understand and can relate to — and tying it to math, science, technology and engineering in a way that brings these disciplines to life, making learning these subjects fun and entertaining. Getting to see this program in action was truly enlightening. I saw how the 49ers’ STEM Leadership Institute could help create future tech leaders, the major goal of their vision and program from the start.

I hope that all of the folks in the sports industry school themselves on the 49ers’ pioneering STEM education program and how it takes full advantage of the role sports can play in teaching STEM-related disciplines. 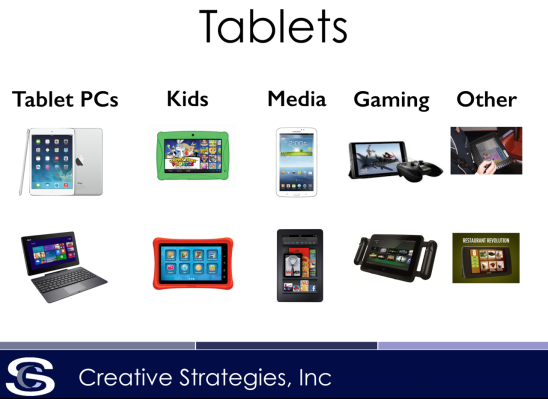 The Future of Tablets? Market Segmentation
Next Up: Editor's Pick