British migrant rights' activist Andy Hall answers reporters' questions as he arrives for a hearing at a court in Bangkok on Sept. 2, 2014.
Christophe Archambault—AFP/Getty Images
By Charlie Campbell

A British labor activist began his fight against defamation charges in a Bangkok court Tuesday, after a report he co-authored made serious allegations regarding abuses in Thailand’s food production industry.

Andy Hall, 33, faces both civil and criminal lawsuits after he alleged that practices including forced labor, the exploitation of children, the paying of unfair wages and up to 10 hours forced overtime daily were rife at factories belonging to Thai fruit firm Natural Fruit.

Defamation is a criminal offense in Thailand and Hall could receive up to a year in prison if convicted, as well as be liable for up to $10 million damages through civil action. Separate charges under Thailand’s much-criticized Computer Crimes Act could carry an additional seven years in jail.

“My work has always been in the public interest and I’ve fought for a long time for migrant workers,” he told TIME before his court appearance, adding that he is “incredibly confident” of acquittal. “I think it would be very difficult for this company to prove that I have any bad intentions towards them.”

Natural Fruit is a big supplier to the European beverages market, and leading food companies have leaped to Hall’s defense, urging the company to drop its legal action, even threatening a boycott if their demands are not met. A petition with 300,000 signatures has also been filed.

“Migrant workers are silent and cannot speak out — often if they do they are killed,” adds Hall. “If I can’t speak out then who will combat trafficking and fight exploitation? Nobody would dare.”

Hall’s investigations were documented in the 2013 report, Cheap Has a High Price. It was only published in Finnish, by the advocacy group Finnwatch, but the defamation charges arose from a subsequent interview Hall gave to Al-Jazeera in Rangoon.

Speaking to the Democratic Voice of Burma in May, Natural Fruit’s lawyer Somsak Torugsa said “under Thai law, any charge of defamation that is made against Thai citizens or Thai companies can be tried in a Thai court of law.”

Natural Fruit’s owner, Virat Piyapornpaiboon, has vehemently denied the allegations several times and said he was saddened by them. “The report caused damage to me and my company. Any accusations were not true,” he told AFP.

Criminal defamation, he says, “is a ready-made tool for use against critical, unpopular, oppositional speech — the very thing human rights defenders are known for and states are known not to welcome.”

Ominously, several other criminal defamation cases are currently targeting those who expose corruption and criminality in Thailand. On May 20, the Thai Army lodged a similar case against a respected Thai human rights activist for “damaging the reputation” of soldiers in the nation’s restive south, after she requested an investigation into an allegation of physical assault.

On Monday, two people were arrested for distributing leaflets demanding murder charges are reinstated against former Prime Minister Abhisit Vejjajiva. They too have since been charged with criminal defamation. In addition, two editors of the Phuketwan newspaper are possibly facing seven years’ imprisonment for printing an extract from a Pulitzer Prize-winning Reuters report that alleged complicity by the Thai Navy in the trafficking of Rohingya Muslims. Reuters faces no such charges.

“They choose their targets,” says Hall, who has also received messages of support and concern from U.N. representatives, the E.U. and various human rights groups. “It’s a bad law and it’s a bad system and it’s really being used to silence those doing benefit to society.”

Zawacki notes that Thailand’s military government has “dropped, expedited or otherwise acted on many other controversial cases,” but the cases against both Hall and Phuketwan are moving forward. This, he says, “only emphasizes this point: political dissent will not be tolerated.” 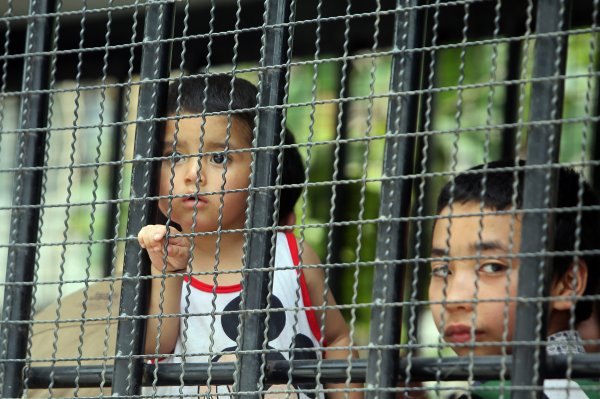 Refugee Children Suffer in Thai Detention
Next Up: Editor's Pick