An Afghan policeman stands guard near the security perimeter setup around the Serena hotel in Kabul late on March 21, 2014.
Shah Marai—AFP/Getty Images
By Noah Rayman

Gunmen stormed a luxury hotel in Kabul on Thursday in the most recent attack on foreigners, but authorities say four assailants were killed and there were no known other deaths.

Interior Ministry spokesman Sediq Sediqqi told Reuters that two guards were injured at the Serena hotel, in the center of the capital. He said the attackers, who appeared younger than 18, entered with pistols in their socks and waited three hours before firing their weapons.

The hotel regularly houses foreign delegations and is currently hosting United Nations staffers in the country to monitor upcoming elections, according to BBC.

In January, a bomb killed 21 people at a restaurant popular among foreigners, shattering a sense of relative security for foreigners in the Afghan capital. Earlier this month, a British-Swedish journalist was shot dead in broad daylight in Kabul. 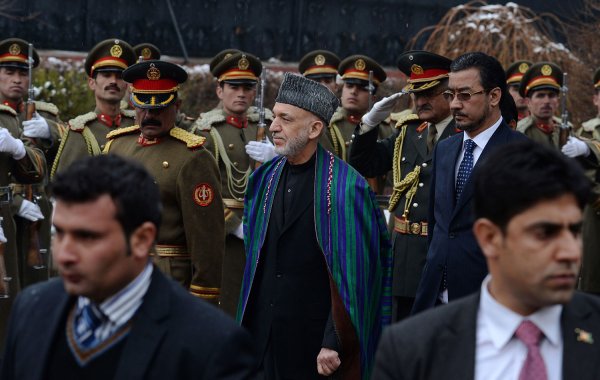 Karzai to USA: We Don't Need You
Next Up: Editor's Pick