Delivering a fiery address marking Labor Day in Milwaukee on Monday, President Barack Obama for the first time indicated his support for the rights of immigrants in the U.S.

The statement, seemingly delivered off the cuff, is the latest indication of Obama laying the groundwork for unilateral executive action that could defer prosecutions for millions who arrived in the United States illegally.

Secretary of Homeland Security Jeh Johnson is expected to give Obama recommendations for action by the end of the summer. Activists believe the President is preparing to extend the deferred action program to millions, but the timing of the actions is uncertain given November’s midterm elections.

Speaking to a boisterous union crowd Monday, Obama criticized congressional Republicans for blocking efforts to raise the minimum wage. “Not only is it not right,” Obama said, “it ain’t right.” “I’m not asking for the moon, I just want a good deal for American workers,” Obama said.

Obama also plugged union membership, which has steadily declined in recent decades, saying that if he was “busting my butt in the service industry” or was a police officer he would join a union to secure higher wages and job protections. 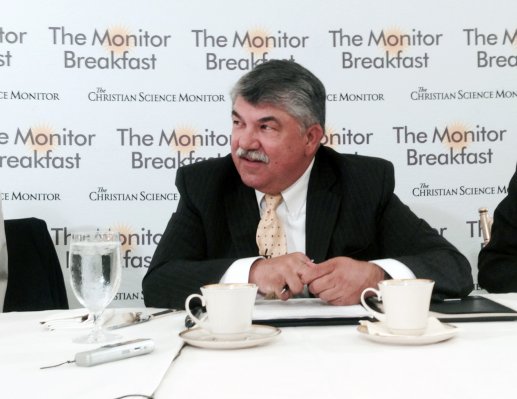 Labor Leader Urges Obama to Go Big on Immigration
Next Up: Editor's Pick