No Matter What Beijing Says, Hong Kong Is Ready for Full Democracy

Pro-democracy activists gather during a rally organized by activist group Occupy Central With Love and Peace (OCLP) outside the offices of Chief Executive Leung Chun-ying in Hong Kong, China, on Sunday, Aug. 31, 2014.
Bloomberg—Bloomberg via Getty Images
By Emily Rauhala

In the crowd that gathered on July 1, 2014, to celebrate the anniversary of Hong Kong’s return to Chinese sovereignty, Nicholas stood out. The group at government headquarters that day was heavy on umbrella-wielding old-timers; they moved in packs and wore matching T-shirts, like visitors from out of town. Nicholas, meanwhile, was 24 years old. He was standing with friends and wearing a yellow football jersey.

The young sports fan and the older attendees shared at least one thing in common: a distrust for Hong Kong’s democracy movement. While hundreds of thousands gathered across town to denounce the diktats of the ruling Chinese Communist Party (CCP), these folks assembled to show their support for the central government in Beijing. Nicholas compared the link between Beijing and Hong Kong to the bond between mother and child. Hong Kong was “throwing a tantrum,” he said, but it would not get its way.

In the weeks that followed, his words stuck with me. It is unusual to meet a young person at staid, pro-establishment events, and rarer still to hear one speak with reverence for Beijing. Hong Kong’s under-25 set is much more visible in the opposition. The main reason I kept thinking back to Nicholas, though, was that his reasoning, and his choice of language, was quickly gaining currency; it echoed all summer through the state-backed press.

Take a read, and you will see what I mean. Recent editorials in the mainland’s major dailies cast the central government as rational and mature, and pro-democracy campaigners as emotional, reckless and adolescent. In one Global Times piece, Hong Kong’s well-planned, peaceful, pro-democracy protests were dismissed as an ineffective and dangerous “clamor.” The central government’s decisions are “legal, fair and reasonable,” according to state news-wire Xinhua; those who oppose their rules are “troublemakers” bent on “sabotage.”

Academics are also in on it. Speaking in Hong Kong on the eve of Beijing’s most recent announcement on political reform, Wang Zhenmin, dean of the law school at Tsinghua University in Beijing, urged Hong Kong to accept a “less perfect” democracy over none at all, according to an account by the New York Times. Calling for patience and trust, he likened Beijing to mother and Hong Kong to child. “The mother always acts in the best interests of her children,” he said. “Her intentions are pure.”

For Beijing, the parent-child metaphor is a rhetorical home run. In one quick, emotionally charged turn, it manages to both intimidate and undercut opponents. We, the parent, have the power, it warns. And that’s a good thing, little one, since you cannot be trusted on your own. The argument is circular, sure. But by the party’s logic, it justifies the decision to keep full democracy from Hong Kong.

Some now wonder if that was the plan all along. When the Union Jack was lowered 17 years ago, the erstwhile British colony was told it would be governed according to a political conceit called “one country, two systems.” Hong Kong would retain its way of life and certain freedoms, but would be beholden, on matters of security, to Beijing. It was never an ideal arrangement, but the city’s democrats believed the “two systems” provision left room for political development.

That space is shrinking year by year, critics say, as the CCP moves to influence politicians, the press and the judiciary. In June more than 800,000 Hong Kong people voted in an unofficial, civil society-backed plebiscite seen as a referendum on reform. Beijing dismissed it. On Sunday, Aug. 31, after months of rallies and debate, China’s legislature ruled out open nominations for the city’s top job. In 2017 the Chief Executive will be elected by Hong Kong voters, but they will be choosing from a list of candidates vetted by Beijing.

To sell the scheme, the central government sent Li Fei, an official from China’s National People’s Congress, to Hong Kong. Li insisted the government’s decision was reasonable, drawing jeers from pro-democracy campaigners in the crowd. He also took a swipe at those who chide Beijing for installing a system at odds with international standards: “The central government is implementing democracy in Hong Kong 17 years after the handover, much faster than what Britain did in its 150 years of rule here,” he said.

The comparison did little to ease the anger of those outside chanting “Shame on the central government.” The former head of Hong Kong’s civil service, Anson Chan, says the decision shows a lack of trust. “For the Hong Kong public there is a deep sense of betrayal and a sense of no more hope,” she told Bloomberg in a television interview. “And from Beijing’s point of view, I think it should be worried because the clear message they’re sending to the Hong Kong people is that ‘We don’t trust you, therefore we must prescreen all the candidates standing for election.'”

The fact is, the people of Hong Kong are absolutely able to chart their own political course. They are witty and well educated, voracious consumers of media and extremely vocal on issues that concern them, from education to conservation to national-security legislation. Hong Kong is not a child, in other words. It is stuck with a priggish parent with no idea how to cope. 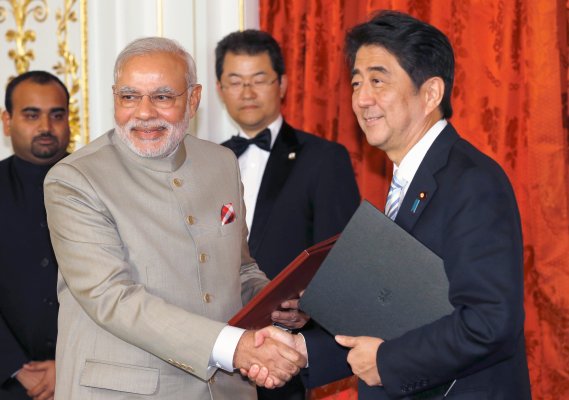 Why India and Japan Need Each Other
Next Up: Editor's Pick