There is an old joke about Islamabad, the sleepy and verdant capital of Pakistan: It is half the size of Arlington National Cemetery, it goes, but twice as dead. On Saturday night, however, the quiet streets near the government buildings in Islamabad were transformed into what many observers compared to a war zone, as anti-government protesters clashed for hours with the police amid clouds of tear gas. Three people are reported to have died, and hundreds wounded.

The clashes have dimmed hopes of an agreement being reached between the embattled government of Prime Minister Nawaz Sharif and the tens of thousands of protesters led by former cricket legend turned opposition leader Imran Khan and his ally, cleric Muhammad Tahir ul-Qadri.

Khan, chairman of the Pakistan Tehreek-e-Insaf party, contends the elections last year that brought Sharif to power for a third time were rigged. He is demanding the resignation of Sharif and fresh elections. Qadri wants nothing less than a complete overhaul of the political system through a “revolution.” Until Saturday, authorities had generally tolerated the crowds of protesters who began gathering in Islamabad on Aug. 14 for mostly peaceful demonstrations.

But as Khan and Qadri make clear that they will not settle for anything short of Sharif’s resignation, the deadlock has raised the prospect of an increasingly dangerous confrontation that could bring down the 15-month-old civilian government.

The two sides blame each other for the violence. Late on Saturday, Khan and Qadri urged their followers to enter the highly fortified “red zone” of the capital, a security-sensitive area at one end of Islamabad that is home to the presidential palace, Parliament, the Prime Minister’s house, the Supreme Court and many foreign embassies. The government says it was forced to respond after the protesters cleared away shipping containers used as barricades and advanced toward the Prime Minister’s residence.

Doctors treating the injured said the police had used several rounds of tear gas, baton charges and even rubber bullets. Images circulating on social media showed the bodies of protesters bearing bloody and livid scars from the apparent use of rubber bullets. At the same time, the police said they were confronted with a contingent intent on carrying out violence against state institutions, armed with large sticks, hammers and iron rods. Some of the protesters cut the gates at Parliament, letting hundreds enter into its lawns and parking area.

Pakistan’s journalists were caught in the middle of the clashes. Geo TV, one of Pakistan’s largest news channels, claimed that its offices were attacked by protesters, broadcasting images of large holes in its glass building. The standoff between the government and the protesters has sharply polarized Pakistan’s lively and excitable news media, with prominent news anchors taking vocal positions on both sides of the divide.

Sharif’s government has attempted to engage with the demonstrators. Earlier in the week, the army chief General Raheel Sharif — no relation to the Prime Minister — had been asked by the government to step in and mediate an end to the protests. But neither Khan nor Qadri seem prepared to compromise on anything short of their exacting demands.

The government says it is prepared to give Khan all he has asked for, including a high-profile judicial inquiry into allegations of electoral fraud, except Sharif’s resignation. But on Sunday morning, the onetime cricket star appeared emboldened by the protests, calling on supporters around the country to convene on Islamabad for a fresh night of protests.

Not all of Khan’s allies believe that’s the best approach. Javed Hashmi, a widely respected member of Khan’s party, spoke out Sunday against the decision to advance on the Prime Minister’s residence and Parliament. “This kind of behavior is not seen in any country in the world, where people pick up sticks and protest outside the Prime Minister’s house,” Hashmi said. He added that if martial law is imposed in the country, Khan will bear the blame for leading Pakistan to that fate.

Sharif, meanwhile, remains determined to stay in power. But Saturday night’s violence, with the threat of another confrontation Sunday, may have eroded his authority further. Up to now, analysts believed that Sharif’s premiership would withstand the demonstrations, despite being weakened by them. On Sunday morning, however, several commentators on Pakistani news channels have been drawing comparisons with 1977, when anti-rigging protests and police brutality against the backdrop of failed negotiations led to a military coup.

Most Popular on TIME
1
The 5 Best New TV Shows Our Critic Watched in October 2020
2
What's Your Risk Tolerance for COVID-19?
3
Judge Orders Extradition of Teen Charged in Kenosha Shooting 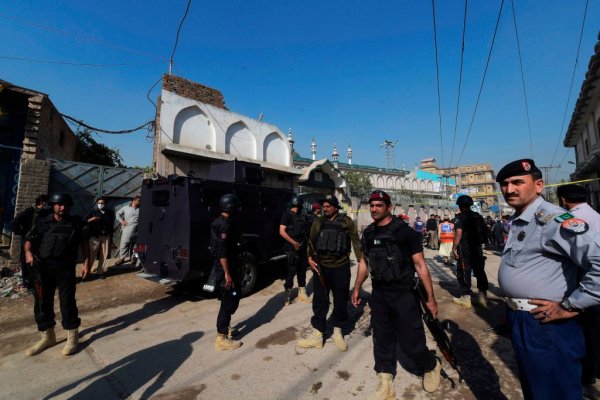 Bomb at Seminary in Pakistan Kills 7 Children and Wounds 70
Next Up: Editor's Pick