Pro-democracy protesters switch on their mobile phones during a campaign to kick off the Occupy Central civil-disobedience event near the Central financial district in Hong Kong at Aug. 31, 2014
Bobby Yip—Reuters
By Emily Rauhala

On democracy, there will be no compromise. That’s the message Beijing sent the city of Hong Kong on Sunday. After months of rallies calling for free and fair elections, China’s legislature effectively shut the door on full democracy, ruling out open nominations for the planned 2017 election of the city’s Chief Executive, the local government’s top leader.

Since Hong Kong returned to China in 1997, the Chief Executive has been chosen by an electoral commission dominated by establishment figures. In 2017, the Chief Executive will be elected by Hong Kong voters. But the ruling Chinese Communist Party (CCP) in Beijing has now confirmed that it will retain its gatekeeper role, making sure candidates are first vetted by a committee to gauge whether they demonstrate, among others things, sufficient “love for country.”

The announcement sets the stage for renewed conflict in the city of 7 million. On Sunday evening, local time, several thousand people gathered at government offices to protest. On an open-air stage framed by the People’s Liberation Army’s Hong Kong headquarters and lighted by the city’s skyscrapers, democracy campaigners denounced the CCP and vowed to push ahead with plans to shut down the city’s financial district. The group behind the push for civil disobedience, Occupy Central With Love and Peace, did not say when, or how, the “occupation” would start.

“We’re telling Beijing this is the start of a movement,” said Joseph Cheng, professor at City University and convener of the Alliance for True Democracy, an umbrella group advocating an open nomination process. “We don’t want to be just another Chinese city.” Beijing warned that if democratic legislators did not support its 2017 plan, the territory would revert to the current system of the choosing the Chief Executive, which has been criticized by many in Hong Kong as unrepresentative and undemocratic.

Becoming “just another Chinese city” is at the heart of the activism, and counteractivism, currently shaking Hong Kong. It has been 17 years since the territory was returned to Chinese sovereignty. Under a political conceit called “one country, two systems,” Hong Kong retained certain freedoms, but was to be beholden, on matters of security, to Beijing. Over the years, however, many Hong Kong citizens say their relative autonomy has been eroded with Beijing pressuring the city’s politicians, businesspeople, journalists and even judges to get its way.

Fears about Hong Kong’s status as a Special Administrative Region of China have brought together wide swaths of Hong Kong society to either oppose, or support, the diktats of the CCP. In late June, some 800,000 people voted on a civil-society-backed monthlong plebiscite on electoral reform that Beijing deemed illegal. Shortly afterward, on the July 1 anniversary of Hong Kong’s return to China, tens of thousands of people (estimates ranged from under 100,000 to more than 500,000) marched to show their support for democratic reform. The pro-Beijing camp held their own hundreds-strong counterprotest and issued a petition signed by 1.3 million supporters of their own.

The latest ruling will only deepen divisions, further widening the gap between those who welcome China’s influence (or believe there is no practical choice but to accept it), and those who see it as a threat. It may also lead to polarization within the pro-democracy camp, as the movement wrestles with how to move forward. For some, the civil disobedience spearheaded by Occupy Central is looking more attractive. “We have to stand up for ourselves,” says Bobby Chan, a 50-year-old private investor who attended Sunday’s protest. “Enough is enough.”

Other self-styled democrats are wary of plans to paralyze Central, the city’s financial district and lifeblood. They worry that blocking a vital part of the economy, and disobeying Beijing, will hurt, not help, Hong Kong’s cause. In a much discussed editorial for the South China Morning Post, titled “The Logic of Beijing’s Vision for 2017 Chief Executive Election,” lawmaker Regina Ip argues that the Chinese plan was based on international law and left room for democratic reform in the future. Progress will come with time and trust in the authorities, she reasons. In a telephone interview with TIME, Ip says Occupy Central’s “damage” to the city would depend on how many people take part and how many participants represent the “hard-core element.”

“Hard-core,” or, to use Beijing’s language, “extremist” elements, figure heavily in the CCP’s opposition to Hong Kong protest movements. In recent weeks, state-backed media have stepped up their rhetorical battle, claiming the democracy movement was a threat to the stability of the territory and the country. Citing an unnamed government source, state media also warned against foreign interference, saying central authorities will not allow anyone to use Hong Kong “as a bridgehead” to subvert, or infiltrate the mainland. “The Chinese government is convinced that there are forces in Hong Kong that want to undermine China,” says David Zweig, director of the Center on China’s Transnational Relations at the Hong Kong University of Science and Technology.

Many activists are unbowed. “We fought for democracy for over three decades,” said Lam Cheuk-ting, chief executive of the Democratic Party, at Sunday’s demonstration in Hong Kong. “We have tolerated an undemocratic government for more than 15 years.” The people, he said, are “extremely angry.”

As heavy rain soaked Lam and his fellow protesters, some of whom were in tears, an advertisement flashed above them. From the heights of a tower bearing the name of a Chinese state-owned investment company, CITIC, beamed a fluorescent slogan, in English and Chinese; it read: “A New Chapter.” Not for Hong Kong. 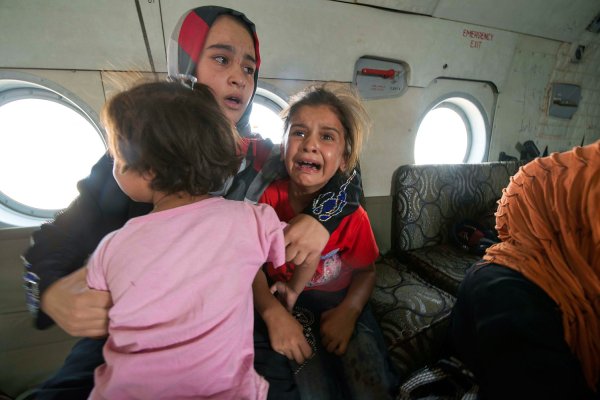