The Great Nunquisition: Why the Vatican Is Cracking Down on Sisters

Nuns are an endangered species. They are dying and not being replaced.

If you think the news is bad now, a world without nuns would be a far worse place. The nuns that I know are much too humble to tout their achievements and all of the good they contribute to society, but make no mistake, they are an integral part of the fabric that holds our civilization together.

In 2014 there were just 49,883 religious Catholic sisters in the United States, down 13% percent from 2010 according to figures from the Center for Applied Research in the Apostolate. To put it in greater perspective, that is a 72% decline since 1965.

Because nuns don’t brag about all of the good that they do or hashtag how awesome they are on Facebook, many people have no idea about the things they accomplish on a daily basis.

You probably haven’t heard about Sister Joan Dawber. Sister Joan, a Sister of Charity of Halifax, runs a safe house in Queens for victims of human trafficking—former sex and labor slaves. She takes these women in when they have no one else to protect them and risks her life to help them rebuild theirs.

About 20 minutes away by car from Sister Joan’s safe house, Sister Tesa Fitzgerald works tirelessly to raise the children of mothers who are incarcerated. When those women get out of prison Sister Tesa helps them get clothes, jobs and an apartment. Those women credit Tesa with nothing less than saving their lives.

For more than four decades Sister Jeannine Gramick has been tireless in her fight for gay rights through her organization New Ways, despite coming under intense scrutiny from the Vatican.

Sister Dianna Ortiz made headlines in 1989 when she was abducted, tortured and raped while working as a teacher in Guatemala. After living through that horror, instead of allowing herself to sink into a terrible depression, she headed up an organization to help thousands of torture survivors around the globe find the will to keep living.

It’s a problem that you haven’t heard about these women. You would think that, during a time when the Church has suffered from great criticism and weathered very public scandals, it would be celebrating these incredible achievements. Think again.

The Vatican doesn’t celebrate these women. In fact, it has done the very opposite. Attacks on American nuns have been happening since 2008, when the Vatican’s Congregation for Institutes of Consecrated Life and Societies of Apostolic Life initiated an “Apostolic Visitation,” a euphemism for investigation, of the nuns.

To put it in perspective, previous “visitations” conducted by the Church were designed to investigate things like the priest sex abuse scandal.

The nuns nicknamed it the Great Nunquisition and in the past eight years they’ve come under scrutiny from the church patriarchy.

A 2012 Vatican document highlighted the Church’s problem with the Leadership Council of Women Religious, the largest group of nuns in the United States. The document claimed that the LCWR was “silent on the right to life from conception to natural death” and that Roman Catholic views on the family and human sexuality “are not part of the LCWR agenda in a way that promotes church teachings.”

Pope Francis has been hailed as a progressive icon. Yet on the subject of women in the Church, he remains loyal to a long-held and antiquated stance: he doesn’t think women should become priests.

Nuns are dying out because their population is aging and young women are not joining their ranks in the numbers they once did.

The young women who could be the nuns of tomorrow share a lot of the same values as the nuns of today. They are fiercely dedicated to the concept of social justice and doing good in the world. Seven in 10 millennials consider themselves social activists, and 72% of them are eager to participate in a nonprofit young professional group.

They want to be of service.

I recently spoke to a young woman who was discerning to be a Catholic sister, but changed her mind before she took perpetual vows of poverty, chastity and obedience.

I asked her why and the answer was very simple and yet disheartening.

“I want to work for an employer that values what I do.”

She plans to work for an NGO. She wanted to be of service to the world, but she also wanted to feel empowered in her job.

Why would a generation of young women raised to believe that they can be anything join an institution that tells them there is something they absolutely cannot be, that there is a certain level they will never reach? Many of the women who are nuns today joined the vocation because it was a way to become highly educated, travel the world and dedicate themselves to a higher good without being beholden to a husband or children.

Young women today can do that with a passport and a Kickstarter account.

I am constantly reminded of something Sister Maureen Fiedler, a feminist and the host of the public radio program Interfaith Voices told me when I interviewed her for my book: the fact that Jesus was, and is, an “equal-opportunity employer.” He loved everyone the same.

If Catholic nuns are to survive in this country, something has to give. The Vatican needs to treat the nuns with more respect. The rules will have to evolve. Women will need to be given more power and leadership roles in the church.

Speaking at the annual LCWR assembly earlier this month, Franciscan Sister Ilia Delio described exactly what it means to be a nun today: “We are about drawing in the poor, the lonely, the marginalized, all those seeking to be part of a whole,” she said. “This is nothing more and nothing less than the most awesome vocation.

It is awesome. The nuns are awesome. But if the Vatican doesn’t start treating them as such, there is no incentive for more young women to aspire to join their ranks.

Jo Piazza is the author of the new book, If Nuns Ruled the World, which shatters the stereotypes of American Catholic nuns and profiles 10 daring sisters. A veteran journalist whose work has appeared in the Wall Street Journal, The New York Times, Slate, the Daily Beast and Yahoo, Piazza holds a masters degree in Religious Studies from New York University. 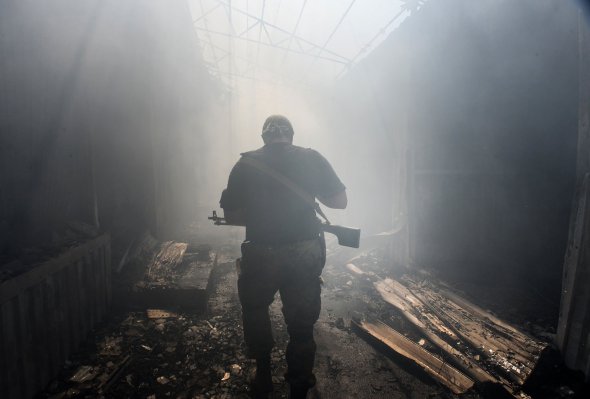 It's a War, Stupid!
Next Up: Editor's Pick