Here's Why We Celebrate Labor Day

The first Monday of September means that white clothes are out, sales are in, summer holidays are over and classes begin. For many of us (but far from all of us), it’s a welcome day off of work or school, ahead of what is likely to be a busier month than the last.

But the Labor Day holiday has a storied past, one of violence and celebration, that’s embedded deep in the history of the American labor movement. And while it has spread around the world in different forms, Labor Day has distinctly American roots.

Here’s a quick primer on the meaning and history of the holiday.

When did Labor Day begin?

The modern holiday is widely traced back to an organized parade in New York City in 1882. Union leaders had called for what they had labelled a “monster labor festival” on Tuesday, Sept. 5, according to Linda Stinson, a former historian for the Department of Labor (the idea for a general labor festival may have originated in Canada, which today also celebrates “Labour Day” on the first Monday in September). Initially that morning, few people showed up, and organizers worried that workers had been reluctant to surrender a day’s pay to join the rally. But soon the crowds began flowing in from across the city, and by the end of the day some 10,000 people had marched in the parade and joined festivities afterward in what the press dubbed “a day of the people.”

When did it become an official holiday?

The practice of holding annual festivities to celebrate workers spread across the country, but Labor Day didn’t become a national holiday for more than a decade. Oregon became the first state to declare it a holiday in 1887, and states like New York, Massachusetts and Colorado soon followed suit. Under President Grover Cleveland, and amid growing awareness of the labor movement, the first Monday in September became a national holiday in 1896.

Why is it on the first Monday in September anyway?

Labor union leaders had pushed for a September date for the New York demonstration, which coincided with a conference in the city of the Knights of Labor, one of the largest and most influential of the unions. The first two New York City Labor Days took place on the 5th of September, but in 1884, the third annual New York City Labor Day holiday was scheduled for the first Monday in September, and that date stuck.

The September rally would soon clash with International Worker’s Day on May 1, which arose out of what is known as the Haymarket Affair. On May 4, 1886, protesters in Chicago gathered to demand an 8-hour workday. Toward the end of the day, a peaceful demonstration devolved into violence when a bomb was hurled toward the police, killing one officer instantly and injuring others. The police responded by firing into the crowd, killing a still undetermined number of people. The incident enraged labor activists but also fueled fears in America that the labor movement had become radicalized, prompting a crackdown on labors groups: the bomb thrower was never identified, but four people were hanged for their alleged involvement.

In the wake of the Haymarket Affair, Union leaders and socialists declared May 1 as International Workers’ Day, and the day was and continues to be unofficially observed in the U.S. It’s also that date that most other countries officially or unofficially observe as a holiday in honor of workers. But when President Grover Cleveland moved to create a national labor holiday, he chose to avoid the thorny history of that May date.

So what’s the difference between Labor Day and May Day (International Workers’ Day) in the U.S.?

Jonathan Cutler, associate professor of sociology at Wesleyan, described Labor Day as a “government alternative” to May Day in an informative interview with NPR about the Haymarket Affair. May Day may have helped promote the creation of a national holiday, but Labor Day is associated with a different significance. “May Day has always been linked to the demand for less work and more pay; Labor Day celebrates the ‘dignity’ of work,” Cutler said in the interview.

We have Monday off, but does the labor community still actually celebrate the holiday?

Yep. To this day there is still a major parade in New York City (and other cities across the country, large and small), and the #UnionStrong will probably make a big showing on Twitter. It’s true that union membership has been declining for years, but many of the challenges that faced workers more than a century ago are still being overcome today, whether by the growing movement for higher wages in the fast food industry or by overworked tech and finance employees calling for better hours.

So, are white clothes really out? 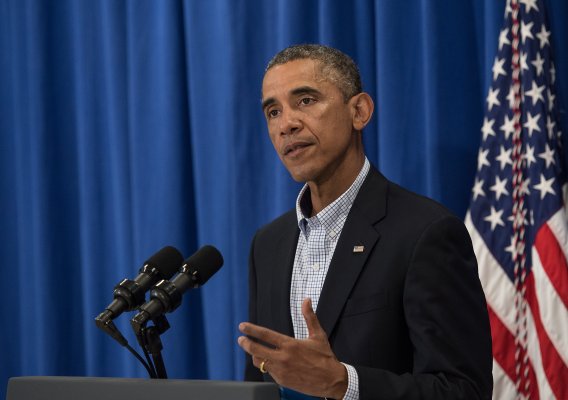 LIVE: Obama on Ferguson
Next Up: Editor's Pick