Gay Daughter to Billionaire Dad: Treat My Girlfriend Like a Human Being

Gigi Chao, the daughter of Hong Kong property tycoon Cecil Chao, next to a family photo of herself; her father, center; and brother Howard at her office in Hong Kong on Sept. 27, 2012
Bobby Yip / Reuters
By Per Liljas

A week after Hong Kong tycoon Cecil Chao doubled his 2012 offer of $64 million to any man who could marry his gay daughter, Gigi Chao has publicly rebuked him and urged her dad to accept her partner of nine years.

“There are plenty of good men, they are just not for me,” she wrote in an open letter published by two Hong Kong newspapers on Wednesday. “It would mean the world to me if you could just not be so terrified of [girlfriend Sean Eav], and treat her like a normal, dignified human being.”

It was after learning that the couple had eloped and received a church blessing in Paris that Cecil Chao announced his original dowry offer. Some 20,000 suitors applied, and since the tycoon upped his bait Gigi Chao has been deluged with phone calls, one of the callers reportedly exclaiming, “I want to be a billionaire!”

To her credit, she also showed a magnanimous spirit in her letter.

“I will always forgive you for thinking the way you do, because I know you think you are acting in my best interests,” she wrote.

Comedian Sacha Baron Cohen may not be so forgiving, however. The actor behind the film Borat is currently working on a movie inspired by Cecil Chao’s dowry offer, the Associated Press reports. 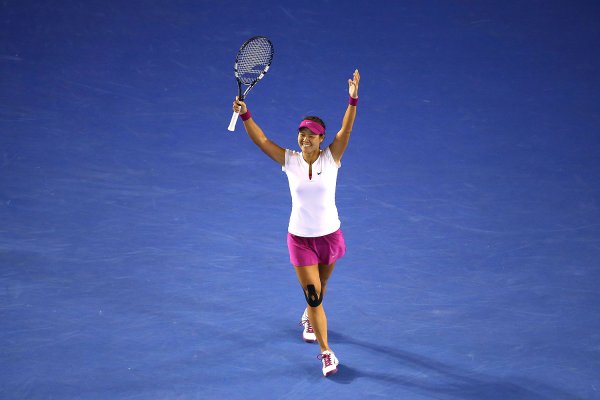 China's Tennis Champion Serves Up a Problem for Its Rulers
Next Up: Editor's Pick