A satellite image provided by DigitalGlobe and made available to media by NATO on Aug. 28, 2014, shows what NATO says are self-propelled artillery at an undisclosed location inside Ukraine at the time the image was made
NATO/DigtalGlobe/EPA
By Zeke J Miller

The North Atlantic Treaty Organization (NATO) announced Thursday that it has photographic proof of Russian regular army forces participating in fighting against the Ukrainian military, saying the situation is “increasingly grave.” The Russian movement follows months of fighting following Russia’s annexation of Crimea earlier this year.

“Over the past two weeks we have noted a significant escalation in both the level and sophistication of Russia’s military interference in Ukraine,” said Dutch Brigadier General Nico Tak, director of NATO’s Comprehensive Crisis and Operations Management Center. “The satellite images released today provide additional evidence that Russian combat soldiers, equipped with sophisticated heavy weaponry, are operating inside Ukraine’s sovereign territory.”

The State Department said Thursday that Russia had stepped up its supply of heavy weaponry to pro-Russian separatists, even after a Malaysia Airlines jet was shot down over eastern Ukraine in July, reportedly by pro-Russia separatist groups.

“It’s clear that Russia has not only stepped up its presence in eastern Ukraine and intervened directly with combat forces, armored vehicles, artillery and surface-to-air systems, and is actively fighting Ukrainian forces as well as playing a direct supporting role to the separatist proxies and mercenaries,” said spokeswoman Jen Psaki.

At the U.N., the Security Council convened an emergency meeting on the crisis in Ukraine. “Russia has come before United Nations Security Council to say everything except truth,” said U.S. ambassador to the U.N. Samantha Power. “It has manipulated. It has obfuscated. It has outright lied.”

Russian officials have said that the Russians fighting in Ukraine are on leave, a claim Power rejected. “A Russian soldier who chooses to fight in Ukraine on his summer break is still a Russian soldier,” she said.

U.S. and European nations have already put in place sanctions on individuals and key sectors of the Russian economy, but they have yet to deter the Russian government.

Western officials have stopped short of calling the Russian action an invasion, wary of further escalating the situation, calling the situation “aggression” or an “incursion.” On Thursday afternoon President Barack Obama is scheduled to convene a meeting of the National Security Council to discuss the situation in Iraq and Syria, as well as Ukraine. 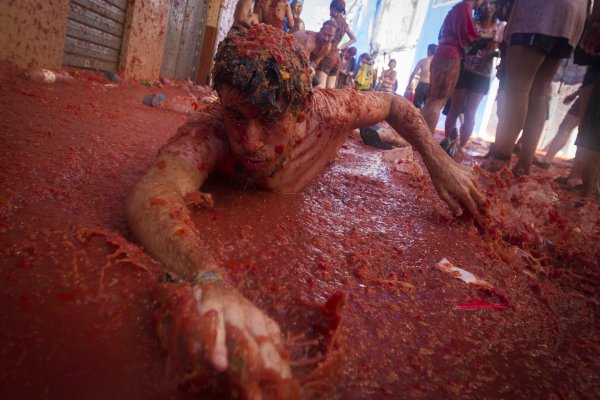 Go Inside the World's Biggest Tomato Fight
Next Up: Editor's Pick