Two Real Stories That Will Change Your Mind About Cheating

Jealousy is probably one of the most toxic emotions out there. It’s a monster of a feeling — all-encompassing. At its worst, it can make you lose sight of yourself entirely. Being in the throes of jealousy can feel like a primal kind of anger.And, yet; is it possible that infidelity, and the feelings it evokes, are at least in part social constructions? Shouldn’t we at least entertain the idea that the notion of monogamous, lifelong partnership — of fidelity as the ultimate golden rule in love — might be just another box on the Puritanical checklist?It’s a hot topic, one that tugs at a lot of very tender heartstrings for a lot of people. Two of those people agreed to write about their experiences with cheating; read on and see if their perspectives change your mind, or at least make you think.

Kelly Bourdet, Refinery29 health and wellness director: Well, it happens to most people, so we might as well get over it.

Infidelity is as difficult to study as it is to define. In a time with so many ways to cheat, our concept of infidelity is often reverse-engineered; we arrive at our definitions based on what, subjectively, we believe would hurt us. Short of having straight-up sexual intercourse with someone outside of the confines of a monogamous relationship (this, I think, is pretty commonly agreed upon to count as ‘cheating’), there are a myriad of other behaviors that some of us feel (sort of) bad about.

Life offers no shortage of situations that are firmly planted in the grey area between accepting praise from your boss and ending up in bed with him or her after a night of “working late.” These include, but are not limited to: texting, sexting, going out to drinks one-on-one, crushing, flirting, emoticon-laden Gchat…the list goes on. We make increasingly arbitrary delineations between physical cheating, emotional cheating, cyber cheating, and so on. We focus both on the intention and the action. But, at the root of any infidelity is a subjective sense of betrayal — one that hinges upon a set of rules that’s likely unique to the specific relationship.

(MORE: How to Survive and Thrive After Cheating)

Figures on infidelity vary widely. This makes sense: Those keeping affairs a secret are likely to withhold that information from their friendly sexuality researcher. But, as a starting point, one 1997 study found that an affair had occured in 40% to 76% of marriages. Keep in mind, though, that this study only examined heterosexual marriages. A more recent study, out this year, found that over 50% of both men and women had committed infidelity at some point — and this study surveyed gay men and lesbian women in addition to heterosexual men and women. So, while we don’t really know how many people have cheatin’ hearts, it’s likely most of us will be touched by infidelity in some way.

In her 2007 book, Lust in Translation, former Wall Street Journal reporter Pamela Druckerman explores how various cultures across the globe deal with infidelity: “Americans are the worst, both at having affairs and dealing with the aftermath,” she told Men’s Health. “Adultery crises in America last longer, cost more, and seem to inflict more emotional torture.” It appears the French, on the other hand, are more accepting of infidelity. In a survey conducted in 2012, only 47% of French people said it was “morally unacceptable” for married people to have an affair (for reference, 84% of Americans believe it’s morally unacceptable).

I’m not arguing that cheating itself is a good idea. What I’m more concerned with is how drastically we react to it, and how much we let it upend our relationships. Is cheating on your partner a shitty move? Absolutely. Is it the absolute worst, most terrible, heartbreaking event of your lives together? Well, that’s subjective. But, I don’t think it has to be.

I’ve been cheated on before, and it didn’t feel great. But, in retrospect, it made perfect sense — and it actually wasn’t that big of deal. My S.O. at the time traveled constantly for his job, often to Los Angeles. Eventually, it came out that he had been hooking up with someone else in LA. Was I mad at the time? Yeah, of course. But, I also realized that we were both in our 20s, we were apart for a significant amount of time, and we both worked in industries that had us out late at night. Taking all this into account, cheating wasn’t such a huge surprise.

(MORE: Why Does Cheating Feel So Good?)

We cling so desperately to a rigid notion of monogamy, and monogamy is a fine goal to have. But, when someone makes a very human mistake or falls short of our happily-ever-after ideals, we freak out. By all means, an instance of infidelity should give pause; a pattern of infidelity definitely means something. Maybe there’s a fundamental problem within the relationship. But, maybe there’s not. The ultimate goal of any relationship should be to have honest and open communication — to be able to communicate your desires without cheating. But, when that doesn’t happen, there’s no reason to throw the baby out with the bathwater.

It’s easy to sit primly on the expectation of a perfectly monogamous relationship. It’s generally accepted that cheating is a horrible betrayal that wounds people terribly. But, haven’t we created that stigma ourselves? By building cheating up to be a life-altering event of devastation, we convince ourselves that it is one. Expecting a mistake-free relationship — and life — seems a bit unrealistic. So, if you cheat or are cheated on, my advice is to figure out why it happened, figure out what you want, and then move on.

Rosemary Downs, writer, 24: Is cheating a big deal? If you’re calling it cheating, then yes, it’s a problem.

The weird thing is, I wish I could be okay with non-monogamy. Intellectually, I really believe that overcoming jealousy and accepting that you can’t hold ownership over another person is one of the most enlightened things you can do. Unfortunately, I can’t — no matter how hard I try — reconcile that with the overwhelming emotional reaction I have to even the very idea of being cheated on (much less the actual experience of it). Maybe, someday, that will change — but for now, I ask anyone I’m with to be with me and only me. If they can’t, that’s going to be a problem.Before cheating happened to me, I definitely fancied myself the kind of person who would take it in stride — maybe even take some lovers of my own to match. I had joked with my boyfriend about my “suspicions,” but I never took them seriously. I was blindsided when they turned out to be true. I can’t explain the intensity of what I felt or how angry I was; there are no words, only me smashing things and tearing my hair out, as melodramatic as that might sound. It was a blow to my ego that I had never experienced before, and as someone with a pretty fragile self image, such a blow was disastrous. I honestly don’t know if it will ever be repaired. Seeing infidelity travel from outside the realm of my imagination to inside my everyday existence changed me fundamentally. It felt like an irrefutable blemish on my person.The odd thing is, I didn’t take out that anger nearly as much as I believe I should have. I don’t think anyone should be cruelly punished or berated for cheating, because while it can be a despicable and heartless act, it can also be simply a stupid one, or a lapse in judgment, or even a manifestation of deeper internal issues. But, I do think things would have progressed better for everyone if I’d been bold enough to make the true extent of the damage known to those around me. I should have yelled and screamed and thrown things (not heavy things, but something) when I first found out, like I often dream about doing now. Catharsis, I suppose, is the preferred term.

Or, maybe I should have just “chosen my own happiness,” or whatever it is people say on Pinterest. Maybe I should have been progressive and open-minded enough to remain unfazed, uninsulted, and unbroken. But, ultimately, at this stage of my life, I do not have that choice, or that power. So, I ask my partner never to cheat again — and I will ask this of anyone else I am with in the future, too.

Everyone has their requirements. Some people could never be with a person who wasted water or hadn’t read Proust; I can’t be with someone who doesn’t give our relationship a special priority — one that is not matched or even mimicked by something on the side. In return, it’s my responsibility to curb my jealousy when it is unwarranted, and to accept that this agreement is about mutual trust, not about complete ownership or snooping on each other’s emails. If we can’t agree on this point, then we just aren’t a good match.

People have told me that I should love and accept myself in spite of what’s happened, that I should build a kind of self confidence that is independent of the events of my life (which, I admit, in the grand scheme of things, has been pretty cushy). But, ultimately, the reason I can justify my point of view on cheating is a belief I hold pretty firmly: that self-love is not an isolated thing that lives high atop a mountain and is untouched by the elements. It is shaped by the other egos around it. That’s not a bad thing, nor is it something to reject in favor of some Randian ideal. In fact, it’s a challenge we should all aspire to meet.

Simply put, it’s a matter of respect, and if one partner asks for fidelity — if (and this is an important if) fidelity is something possible and acceptable for both partners — it’s a small but important kindness to honor that request. There’s a basic equation at play. If being cheated on hurts your partner, and you love your partner, then you shouldn’t do it. What could be clearer than that?

(MORE: What I Learned When My Boyfriend Cheated on Me) 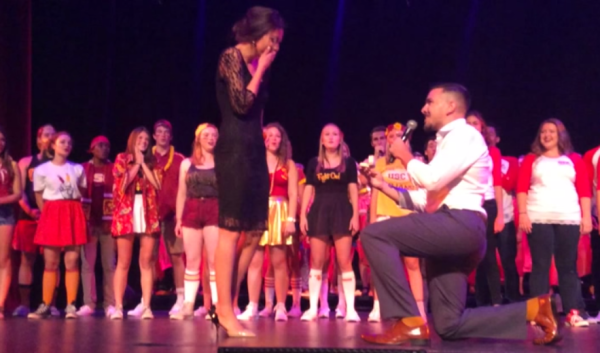 Proposal During a Performance Will Make You Tear Up
Next Up: Editor's Pick