Why It's So Hard to Make New Friends

This article originally appeared on Refinery 29.

So, you’re an adult now (even if you don’t always feel like one). Maybe you eat popcorn and fro-yo for dinner on the regular, but you’ve also learned — we hope — how to keep both your plant and pet alive and kicking. If you’re lucky, you might have an actual love life, as well as a decent job, maybe even in a city you like.

But, despite all that good stuff, if you’re like lots of 20- and 30-somethings today, there might be one area of life that feels a bit lacking: your platonic friendships. At 37, I’ve noticed a trend: As more and more of my friends — both guys and girls — have gotten married and had kids, I, in turn, have started feeling more and more alone. I’ve often found myself wracking my brain to find people to hang out with on weekends. It’s been even tougher since I moved back to my hometown last winter, to be closer to my mom. I hadn’t lived here since I was 18, so it truly felt like starting from scratch.

Rachel, 36, a writer and also single, can commiserate. Naturally shy and still adjusting after a move of her own, Rachel doesn’t just have a hard time reaching out to form new friendships; she also feels “less likely to make an effort to connect with women who seem to be in different [life] places than me.” Understandably, she has started gravitating toward younger friends because she finds it somewhat difficult to relate to most locals (South Carolina folks) her age, who tend to be married with kids.As Rachel and I can both tell you, gone are the days when scoring a new BFF was as simple as walking up to that cool misfit in your math class and demanding to be his or her buddy. Oh, how times have changed. Until now, explains Andrea Bonior, PhD, author of The Friendship Fix, “we spent our lives being around people our age. In school [and] in college, [we had] natural proximity to an immense amount of people to choose to befriend.” As grown-ups, though, we’re so busy muddling through the daily grind of managing our lives — landing jobs, booking as many vacations as possible, navigating in and out of relationships, fitting in exercise, moving to new cities. It may feel easiest to keep in touch primarily through texting, Facebook, and Instagram instead of actually catching up face-to-face.

(MORE: How Not to Be a Toxic Friend)

But, if you’re mainly relying on virtual avenues to sustain your friendships, you could be doing yourself a disservice. “We may feel like we know a lot of people [online],” Dr. Bonior says. “[But,]… typing ‘LOL’ under someone’s Facebook status [is not] connection. You feel too busy to go out and see friends, but you have time to spend three hours a night looking at people’s Facebook vacation photos?”

No one’s suggesting you jump up and close shop on your social accounts right this second. But, if you’re feeling lonely in your real life, you might want to try using those avenues solely for what they are: networking hubs to help you keep track of old school rivals and camp friends. Random Facebook acquaintances won’t be there to hold your hand through a family meltdown or when you’re laid off from a job you love.

Skimping on in-person social time can also be detrimental to both your soul andyour body. Experts claim that up to one-fifth of Americans currently define themselves as “lonely” (and, according to AARP, that number rises to about 35% for people over age 45). Approximately 20% of adults lament having only one buddy to talk to, and depressingly, another 25% say they have no one at all.

That kind of isolation can cause lasting damage. Dr. Bonior notes that “having good, quality friendships improves your longevity [and] your mood, puts you less at risk for depression, helps you get over trauma, and helps your blood pressure.” The problem is that most of us don’t adequately prioritize our friendships; heading out to meet a pal at happy hour can start to feel more like a luxury than a necessity. Instead, Dr. Bonior urges that we treat our friendships as a healthy part of our routine, “like going to the gym.”

Using Tech as an Asset

But, what if you’re one of those people who honestly feel they have no one to hit happy hour with? We daresay it’s time to get out there and find yourself more friends. We know the idea might sound overwhelming (you couldn’t pay me to approach a stranger in Starbucks, whether male, female, or monkey), but isn’t your health enough of an incentive to nudge you beyond your comfort zone?

Janis Kupferer had to do just that after moving to Denver a few years back. While scoping out men on a dating site, she decided to check out some of her straight-female “competition.” Kupferer realized that some of the site’s female members seemed, well, cool — like the kind of people she’d want to be friends with. Inspired, Janis decided to launch a new social networking site, SocialJane, which is devoted to helping women meet like-minded buddies. The site looks like your average dating site, with boxes to add a profile headline, photos, your favorite activities, and more. “[It has] all the same features and benefits that [can make] looking for love online a success (ease, convenience, and community)…but for platonic friendships,” she explains.

So, does it work? I tested it for myself: I joined the site, created a profile, and messaged some women who seemed to share my interests. It’s been a few weeks and, as of now, none of the women have written back to me (sadface). I do realize that a lack of response is par for the course on dating sites, but I guess I was hoping for a change of pace in the friendship zone. Still, it’s a cool idea, and one of a handful of similar sites that are springing up, promising to help with the ever-difficult friend search.

(MORE: An Ode to the Best Kind of Friends)

Make an Effort to Engage

When it comes to real-life strategies for meeting people, though, Dr. Bonior says you needn’t look much farther than your corner cafe, record shop, yoga studio, or coworking space: “Frequenting the same places over time [is a good approach]… You’ll [eventually] feel like member of a community.”

You can also try volunteering, attending spiritual services (meditation clubs, support groups, or 12-Step groups work, too), joining clubs based on your interests (check out Meetup.com — there’s a meetup for EVERYTHING), taking classes, traveling alone, wine- and beer-tasting, joining adult athletic leagues (bocce! kickball! roller derby!), professional and special-interest conferences (gaming, writing, you get the picture), getting a new job…the list is long. Dr. Bonior also recommends joining “listservs for your apartment building, [commenting] on a blog you like…lots of people meet some of their best friends on the Internet” — provided you vow to take those budding buddies off your laptop and into the real world.

As for me, I’ve been in my new home base of DC for eight months and I’m still trying to pin down more solid friendships. I made one local writer-friend via Twitter, but the tactic that’s worked best for me has been asking friends in other cities if they happen to know any cool people in my re-adopted hometown — i.e., getting set up on blind, but pre-vetted, friend-dates.

The takeaway? Some folks are natural introverts who may be content hanging out alone, or with just one close friend or two. If that’s you, that’s great; you keep doing you. But, if you’re unhappy with your present social-support structure — as lots of people are — it’s up to you to push yourself to do things differently. As Dr. Kupferer notes, you’ve “got to stick your neck out.” Think of it as the first day of kindergarten all over again, and strike up a conversation with a stranger — over coffee, perhaps, instead of crayons. 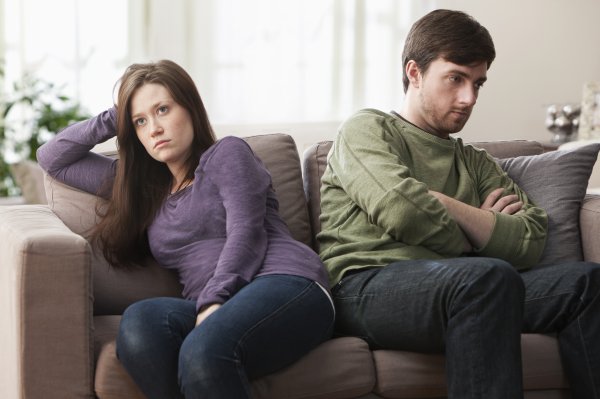 Your Facebook Habits Can Help Predict If You’ll Get a Divorce
Next Up: Editor's Pick