America Is Using Cannons to Kill Mosquitoes in Iraq

U.S. airpower has been largely limited to attacking and destroying Humvees and other vehicles inside Iraq.
Youssef Boudlal / Reuters
By Mark Thompson

The new war the U.S. is waging over Iraq is succeeding. With help on the ground from Kurdish and Iraqi troops, U.S. airstrikes have pushed fighters from the militant group Islamic State of Iraq and Greater Syria (ISIS) away from the Mosul Dam.

But the daily details of U.S. military airstrikes only serve to highlight how little American military might can do.

“One strike destroyed an [ISIS] Humvee near the Mosul Dam,” Sunday’s announcement said.

“The strikes destroyed or damaged three [ISIS] Humvees,” Centcom said a week ago.

The world’s most powerful military is dispatching multi-million-dollar aircraft and their pilots into harm’s way to destroy $70,000 Humvees.

Adding insult to injury, the U.S. gave those vehicles to the Iraqi military, which fumbled them into ISIS hands after the militants overran Mosul and plundered Iraqi arsenals two months ago.

This may be the challenge of 21st century war. The American military, honed by its successes in World War II, is primed to attack militaries that look like it. Germany, Japan, the Soviet Union and Saddam Hussein’s Iraq each presented U.S. war planners with target-rich environments.

But why should anyone confronting U.S. might want to fight on America’s terms? That’s why the U.S. military has been less successful in the target-poor environments of Vietnam, Afghanistan and post-Saddam Hussein Iraq.

President Barack Obama’s 100-plus airstrikes in Iraq against ISIS targets have beaten the jihadists back. Now he’s weighing an expanded campaign that would attack ISIS targets across the border, in Syria.

But any such action lacks a smart and achievable goal. Attacking ISIS in Syria would make the U.S. a de facto ally of Syrian dictator Bashar Assad, whose civil war has killed nearly 200,000. It was three years ago this month that Obama said Assad must surrender power.

Most Americans don’t want more military action in the Middle East. Until they do—and their representatives in Congress are willing to back it with a declaration of war against ISIS—letting U.S. warplanes attack U.S.-built-and-paid-for Humvees inside Iraq may be the best, if unsatisfying, option. 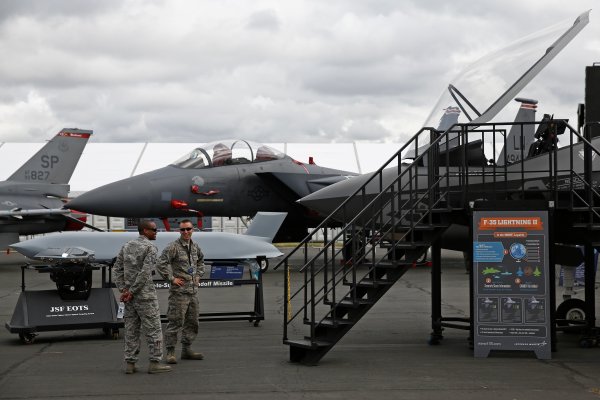 Pilot Still Missing After Fighter Jet Crashes in Virginia
Next Up: Editor's Pick