Chastain stars in The Disappearance of Eleanor Rigby, a new trilogy of films from director Ned Benson—one story being released in three versions
Peter Hapak for TIME
By Lisa Schwarzbaum

When a romantic couple dissolves its coupledom, each participant has a version of how, why and what next. The Disappearance of Eleanor Rigby–a trilogy of films starring Jessica Chastain as a woman improbably named after the mournful Beatles song about all the lonely people–is a breakup story that tries to reflect both sides by telling two tales, one of the husband, played by James McAvoy, and one of the wife. And the evolution of the project, the feature debut of filmmaker Ned Benson, is in itself a tale of “he said, she said,” because when Benson showed the first draft of his screenplay to his lead actress, she loved it but had some notes. “I found it to be like many scripts in the film industry today–lacking in the female character,” she says. “I really wanted to know what happened to her.”

No problem. In consultation with Chastain, Benson wrote a second full-length version of the story, told more from Eleanor’s perspective–a tricky POV, because in the wake of a cap-T Tragedy shared by the couple, the lady is nearly catatonic with depression. Then Benson did something even more unusual: he filmed them both.

Together the two movies–called The Disappearance of Eleanor Rigby: Him and The Disappearance of Eleanor Rigby: Her and releasing simultaneously in October–run some 189 minutes, with room for ellipsis, nuance and a powerhouse supporting cast, including Viola Davis, Isabelle Huppert, William Hurt, Ciarán Hinds, Bill Hader and Jess Weixler. New York City’s East Village also plays an evocative part, providing streets filled with all the hipster people.

But wait–there’s yet a third version, being released before the other two, in September, called The Disappearance of Eleanor Rigby: Them. This iteration, which intertwines perspectives from both sides into a unified sad song of love found and lost, was produced at the bidding of the Weinstein Co., distributors of all three. By all means, the Weinsteins seem to be saying to moviegoers, see Him and Her when they come out in October, but in case life gets in the way of a marathon screening experience, you can get the point of this unique project right now, with Them.

And the point–or certainly one of the main points–is to watch Chastain do the things onscreen that have made her a star. The three films showcase many of her strengths, among them her particular projection of composure, intensity and veiled self-containment. Eleanor is at times cold, or grieving, or numb, or punishing and quite thoroughly unlikable. At other times (flashing back to the couple’s happier days), she is playful and glows with love. The character gives mixed messages, and Chastain–with her luck-of-the-genes combo of red hair, porcelain skin and fine bones that together read as not quite of this time and place–keeps track of them all.

“I found my groove,” she says, remembering the days when casting directors didn’t know what to do with her. “A friend of mine said, ‘If you read all the scripts for TV shows, the character never says “redhead.” It’s either “blonde” or “brunette.”‘ The easiest path to be on is where you look like everyone else. When I’m cast, I’m already changing the idea of what a character could be. I fight against any kind of stereotype that people try to throw at me.”

She will no doubt add more character traits to her repertoire with Interstellar, a sci-fi blockbuster directed by Christopher Nolan that opens Nov. 7 and takes place in a galaxy far away, in size and budget, from Eleanor Rigby.

It is partly because of her mutable skills that Chastain has made the magical leap from determined actor who paid her dues in years of TV-drama guest gigs to radiant, Oscar-nominated movie stardom. Some of the magic was also a result of the dumb luck of production and release schedules. Remarkably, The Debt, Take Shelter, Coriolanus, The Tree of Life, The Help, Texas Killing Fields and the documentary Wilde Salomé were all released in 2011, which made that seem like the all-Chastain all-the-time year. Then in 2012 came Zero Dark Thirty, which brought her a Best Actress Oscar nomination, along with Lawless and Madagascar 3: Europe’s Most Wanted, in which Chastain provided the voice of a jaguar.

But her success is the consequence not only of a two-year juggernaut of releases but of a refined talent linked to an urge to act that has driven her since girlhood in Northern California. “Acting has always made me feel closer to people,” she says. “In real life, in the beginning, I can fake it, but it takes a long time for someone to really know me. There is something about me that is scared. Or maybe it’s a fear of being rejected. But when I’m acting, I don’t have that. I meet strangers, and I feel immediately close to them.”

Perhaps now is a good time to mention that Benson is not just the writer-director of the Rigby trilogy; he is also the star’s ex-beau. The two met years ago when Chastain saw one of Benson’s short films at a festival and asked him to keep her in mind for future work. By the time they connected as a couple, Benson had already written the Him screenplay. (“Thank goodness he had written this before we were friends. This is not about our relationship!” Chastain assures the curious.)

“A lot of people had warned me against [making the movie],” Chastain says, forthright. “‘How could you work with an ex?’ But we approached every part of it with love. It felt like we were both giving each other a great gift. I was excited to help get his first movie made. And I never had a person write a part for me that is so complex, so flesh and blood.”

That, at any rate, is the story as told by Her. And we’re sticking with it.

Correction: The original version of this story incorrectly stated the release date of “Interstellar.” The film opens Nov. 7, 2014. 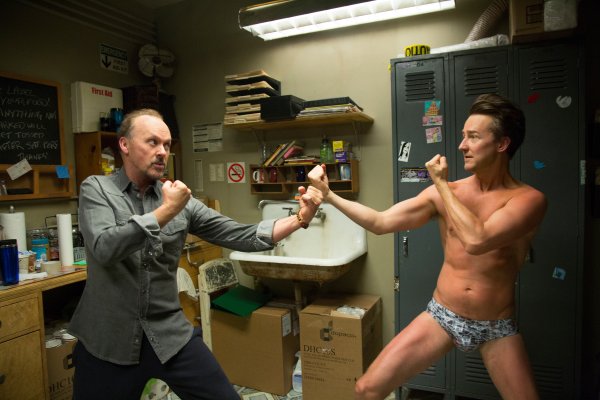 Birdman at Venice: Can an Ex-Superhero Still Fly?
Next Up: Editor's Pick