I’ve often heard the wind and solar industries mocked as “hippie energy” or “Obama power.” Mitt Romney once dissed them as “imaginary.” But at this summer’s Renewable Energy Finance Forum (REFF) Wall Street, clean-tech venture capitalist Christian Zabbal offered a new jibe: “bulge brackets.” Zabbal complained that the wind and solar space has become so safe–and so overcrowded with giants like Bank of America, Citigroup and Goldman Sachs–that it’s no longer attractive to cutting-edge investors. The cool kids don’t want to play in bulge brackets. They prefer wide-open spaces that the big guys won’t touch.

In other words, the clean-power revolution is for real. The bulge brackets are bulging because wind and solar have gotten much cheaper, less novel and more predictable. Renewable projects are producing steady returns, so vast pools of risk-averse institutional capital are seeking new ones. Green electricity is no longer avant-garde; it has produced more than half of new U.S. generating capacity this year. Wind has tripled since 2008, while solar is up 1,200%. This is terrific news–for homeowners who reduce their electric bills by going solar, ratepayers whose utilities save them money by buying wind power, and the planet.

But there’s a deeper message in the bulge brackets. People assume the future of clean energy depends on gee-whiz technological innovations: better solar panels and wind turbines, cheaper batteries and biofuels. And we will need those advances in the long term to cut carbon emissions 80% by 2050. But the biggest advances in the near term are likely to be boring financial innovations. The direct costs of deploying renewables are dropping fast, but the capital costs are still too high. The future builders who bring clean power to scale probably won’t be scientists but financial wizards like the suits at REFF Wall Street.

This is already happening in the solar industry, where gradual improvements in photovoltaic panels–by the ill-fated manufacturer Solyndra, among others–have not been the key to making them cost-competitive. The innovation that launched the sunshine revolution was the solar lease, which has helped homeowners and businesses install rooftop systems without having to plunk down tens of thousands of dollars up front. Now they can sign 20-year contracts with no money down to lease panels from installers like SolarCity or Sunrun, then make payments out of the savings on their electric bills.

Now we’re moving into the next phase of the renewable revolution. Those 20-year leases look a lot like mortgages, auto loans or other financial instruments that Wall Street routinely packages into securities. The financial crisis made securitization a dirty word, but it’s a powerful tool that can convert a dribble of investment into a cascade and slash capital costs. And Wall Street has begun to package solar contracts into securities. The market for commercial solar securities has grown from less than $1 billion to $15 billion since 2008.

The buzz at REFF Wall Street was about MLPs, yieldcos and other obscure financial arrangements designed to sluice rivers of cash into clean energy. The market in green bonds has exploded from $2 billion in 2012 to $16.7 billion in the first half of 2014. At a panel moderated by Kyung-Ah Park, a Goldman Sachs managing director, solar developer Jeff Weiss summed up the industry’s challenge. “You can’t ask Kyung-Ah for a million dollars,” said Weiss, co-chairman of Distributed Sun. “You can only ask her for a billion dollars.” Goldman isn’t interested in your roof, but it might get interested in thousands of roofs.

Distributed Sun’s new product, truSolar, typifies today’s green innovation. It’s an investment platform that makes solar contracts much easier to evaluate, breaking down more than 600 potential risk factors for investors. The goal is to make solar deals as dull as any other financial instrument so the Kyung-Ahs of the world will feel even more comfortable throwing billions of dollars at them. “You’ve got this in every other asset class,” Weiss said. “Why not ours?”

This is how the bulge brackets will get bulgier. As it gets cheaper to finance green projects, more will be deployed, so they’ll get even cheaper to finance. Green finance isn’t cool, but it can help cut emissions now. And it can free up the cool venture capitalists to focus on geniuses in garages so their inventions can cut emissions even more down the road. 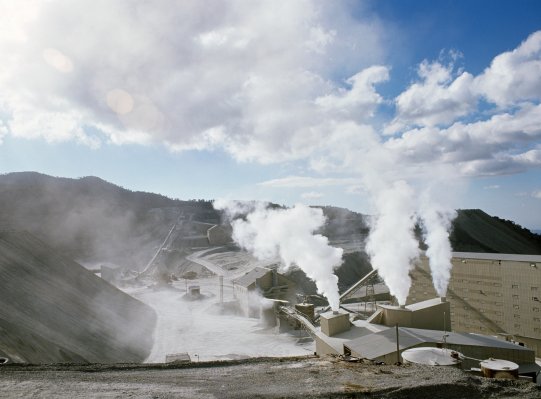