Senator Kirsten Gillibrand, D-NY attends a press conference calling for the creation of an independent military justice system to deal with sexual harassment and assault in the military, in the Russell Senate Office Building on Capitol Hill in Washington, DC on Feb. 6, 2014.
Mandel Ngan—AFP/Getty Images
By Maya Rhodan

Sen. Kirsten Gillibrand (D-N.Y.) says in a new book that she has faced several sexist encounters with her male colleagues, being nicknamed everything from “Honey Badger” to “hottest member of the Senate.”

“Good thing you’re working out because you wouldn’t want to get porky,” Gillibrand says one colleague told her in the congressional gym, according to an excerpt of her book Off The Sidelines published by People.

After she lost weight following a pregnancy, Gillibrand writes that one male colleague squeezed her waist and implored: “Don’t lose too much weight now, I like my girls chubby.”

And she says one southern congressman told her, “You know, Kirsten, you’re even pretty when you’re fat.”

“I believed his intentions were sweet, even if he was being an idiot,” Gillibrand writes.

But Gillibrand told People she hasn’t been fazed by these incidents, and said she’s using the sexism she’s faced working in Congress as motivation to take on issues like military and campus sexual assault. In the book, which is being released in September, she calls on other women to “speak up, gather strength” and “support one another.”

“If we do, women will sit at every table of power making decisions,” Gillibrand writes.

“If I can work an issue like sexual assault on college campuses and drive a national narrative and know I’m making a difference,” Gillibrand said, “then whether or not we pass another bill in Congress, there’s still good things I can do.”

Read the rest of the story at People 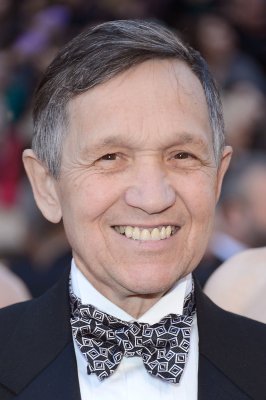 Dennis Kucinich Is Going to Burning Man
Next Up: Editor's Pick