A damaged aircraft is pictured on Aug. 24 after shelling at Tripoli International Airport
Aimen Elsahli—Reuters
By Aryn Baker

Airstrikes don’t usually come with a calling card. After all, the intended targets usually know who their enemies are. But in Libya, a series of fighter jet strikes on Islamist militias fighting for control of Tripoli’s airport couldn’t have come from their traditional rivals—Libya’s fractious militias may be well armed and powerful, but none have an effective air force. On Monday, unnamed US officials confirmed to media outlets what many Libyans had already feared: the country’s neighbors are starting to choose sides in a conflict that is rapidly descending into civil war.

Sunday’s airstrikes, as well as an earlier attack on Aug. 18, were launched by the United Arab Emirates (UAE) with assistance from Egypt, U.S. officials told the BBC and the New York Times. Both countries vociferously deny the claims, but to experts and scholars who closely follow regional politics, the denials ring hollow. With radical Islamist forces gaining ground in Libya, says Ronald Bruce St. John, an independent scholar and author of five books on the country, neighboring countries fear for their own stability—particularly in the wake of recent gains in Syria and Iraq by the Islamic State of Iraq and Greater Syria (ISIS). “It’s not there yet, but if Libya moves to an ISIS-type state, every one of its neighbors will feel threatened.” And not just immediate neighbors. Many countries in the Middle East, from Saudi Arabia to the UAE, are threatened by their own internal Islamist uprisings. The fear is that an Islamist success in Libya could inspire stronger movements at home.

Ultimately, the airstrikes were a failure: the Islamist-aligned militia retained control of the airport. But the consequences for Libya, and the region, could be devastating.

From the first days of the uprising against Col. Muammar Gaddafi in 2011, Libya’s neighbors sought to influence the outcome by supporting different factions within the opposition. Qatar and Turkey, more comfortable with Islamists in general, backed radical militias with weapons and financial support. Others backed tribal militias over ideological ones.

Now that Gaddafi has fallen and a fledgling democratic state has taken his place, those militias are battling for political influence, the country’s vast oil wealth and lucrative smuggling routes. Increasingly, they are backed by their former regional sponsors, who want a say in Libya’s political future, and are willing to go to great lengths to ensure it, says Professor George Joffe, a research fellow specializing in North Africa and the Middle East at Cambridge University in the United Kingdom. “The fact that UAE has attacked Tripoli means that in effect the proxy war has become the real war.”

But it is not just a question of Libya’s spoils. The regional power struggle unfolding inside Libya is one part of the post-Arab Spring conflict between secularist autocrats and the Islamist groups that would overthrow them.

The problem is that none of Libya’s militia groups are poised to bring security, establish stability or protect democratic gains. The leader of the principal anti-Islamist militia, former general Khalifa Hifter, attempted to take power by force in May, hardly inspiring confidence in his support for democratic governance. “Much of this is about economics pure and simple: the control of smuggling networks, oil production facilities [and] airports,” notes Frederic Wehrey of the Middle East Program at the Carnegie Endowment for International Peace. “The militias are not necessarily ideologically different but many are mafia-like groups that have allied with key tribes and regions.”

Had militia infighting stayed local, there was always the chance of local resolution, adds Joffe. Military interference by regional actors escalates the tensions and raises the stakes. “No longer do you have a dispute between two militia groups,” says Joffe. “Now you have two states confronting each other indirectly, and they are not going to listen to what locals say about reconciliation, so the real danger is that Libya becomes a open war.” There is widespread agreement that Libya will require some sort of international intervention to solve the internal conflict between militia groups. Now that regional actors are taking sides, resolution will be harder to reach. 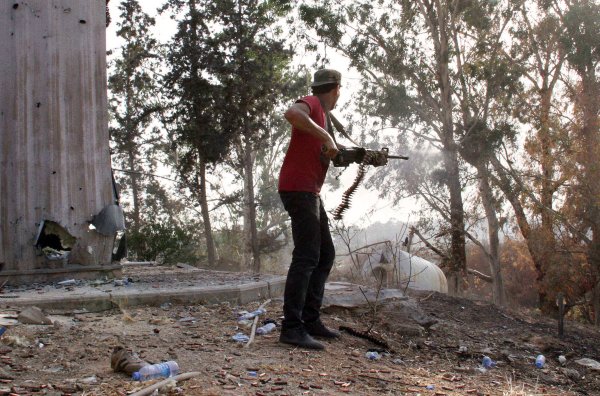 Warplanes and Explosions Reported in Tripoli
Next Up: Editor's Pick