The factory floor is silent but not empty. Dozens of workers dressed in crisp white lab coats, hairnets and matching Crocs are maneuvering dollhouse-size hand tools and manipulating minuscule parts to assemble wristwatches. With loupes to eyes, one line builds the movement–the timepieces’ quartz-powered brain. Another line does nothing but put the dials in place, while others set the hands, fix the case backs and lash the leather straps. This isn’t a clean room in Geneva or a Chinese factory in Shenzhen. These movements are taking place behind the floor-to-ceiling glass wall that separates Shinola’s Detroit headquarters from its sprawling state-of-the-art factory.

One of the company’s first nine employees, Titus Hayes is in charge of technical repairs. The 23-year-old looks around at the shop floor, where 60 people now work (overall the company payroll has swelled to 230). “Before I was just one of many,” he says. “Here I feel part of something. I’ve never had a job like this.”

If the name Shinola rings a bell, it may be because of an off-color taunt. Founded in 1907, the brand-name shoe polish was a staple for American GIs, who popularized the expression “You don’t know sh-t from Shinola.” Over the past year, the brand–which was bought and relaunched by Fossil Inc. founder Tom Kartsotis–has established itself as a force in American-made design. The company’s watches range in price from $475 to $950 and can be found at Bloomingdale’s and Neiman Marcus as well as its two flagship Shinola-branded stores. In 2013, the company made about 50,000 watches; this year it wants to make 150,000. It has also expanded into customized bicycles, leather goods, journals, soft drinks and, naturally, shoe polish. During its first six months in business, Shinola generated more than $20 million in sales. The company expects to turn a profit by 2017, when revenue is projected to hit $100 million.

Shinola has earned high marks among style arbiters. Actress Kerry Washington put Shinola products on her Christmas wish list, and the company’s timepieces seem to appeal to both Democrats and Republicans–former President Bill Clinton wears one, as does Michigan Governor Rick Snyder. (Snyder, who says Shinola is part of Detroit’s comeback story, had to buy his online. “It’s hard to get one,” he adds.)

More than style is at stake. Shinola is growing at a time when American manufacturing is in full revival and the global trade equation is being rewritten. Climbing wages in China, higher transportation costs, a weaker dollar, rising U.S. productivity and cheaper energy: all these factors mean American firms are finding it increasingly competitive to make things at home. Companies like Shinola–native U.S. manufacturing operations determined to nurture domestic cottage industries that have all but disappeared–are the latest test of these trends. If Shinola can thrive, it could become part of something the Motor City hasn’t seen since the glory days of American automaking: a new boom in manufacturing.

On West Milwaukee Avenue in midtown Detroit, the 11-story brick Argonaut Building soars above the horizon, a beacon of better days. From 1936 to 1956, it was General Motors’ research laboratory, where every GM car was designed. Here the first automatic transmission was mass-produced and the first heart-lung machine developed. During World War II, some 60,000 sq. ft. was turned over to manufacturing fighter jets. But by 1999 the Argonaut stood empty.

Today the building is owned by the College of Creative Studies, a local art school. Shinola occupies the fifth floor. Kartsotis, 54, first visited the site in 2011 as plans for Shinola began taking shape. He’d founded fashion-accessories giant Fossil in 1984. In 2000 he stepped down as Fossil’s CEO and began winding down his financial stake in the company. Three years later he founded venture-capital firm Bedrock Manufacturing, focusing on domestic industries and investing in legacy brands like the maker of outdoor gear Filson as well as Mollusk, a San Francisco surf-wear maker. At first, “it was the irony of building a watch factory in Detroit that was the attraction,” he says.

Touring the Argonaut convinced Kartsotis that his company could use Detroit’s manufacturing legacy to bring back a host of industries that had either gone offshore or died altogether. That’s why Shinola made the Detroit story and its history the centerpiece of the company’s $10 million marketing campaign last year. “The whole time we were studying this idea,” says Kartsotis, “we expected to run into something that would make it impossible. Detroit never showed us impossible.”

By 2012, Shinola’s team had settled on its first batch of watch designs. It had been over 40 years since America had manufactured timepieces on a large scale. The last producer, Hamilton, is now a subsidiary of the Swiss outfit Swatch. Even finding a master watchmaker proved difficult. Eventually, a Shinola recruiter met Stefan Mihoc, a Romanian immigrant who had been working as a machinist for 10 years in Detroit, after he posted his résumé online.

In order to get up and running, Shinola partnered with Ronda AG, an established Swiss maker of movements, to supply components and to train Detroit workers in how to assemble, test and fix watches. (Ronda has a financial stake in the firm.) Shinola says its factory workers earn more than Michigan’s $7.40 minimum wage. The company launched last April at the watch world’s annual BaselWorld confab in Switzerland alongside horology heavy hitters like Rolex and Omega.

Now Shinola is in expansion mode, according to CEO Steve Bock. Last year it opened flagship stores in Detroit and Manhattan, with more to come in Minneapolis, Chicago, London and Berlin. On its drawing board of future products: jeans, shoes and eventually furniture. “This is not just a watch company,” insists Daniel Caudill, Shinola’s creative director, a longtime brand and product stylist who was previously Adidas’ global design guru. “This is a design company.”

The company’s biggest problem now is finding U.S. suppliers and manufacturers to make good on its boldface promise of American-made. Most “American” watches today are in fact made in Asia or Switzerland. (Fossil watches by and large are made overseas.) Shinola’s reliance on some foreign-made parts for its watches and bikes has made it the target of critics who ask just how homegrown its products really are. Its watches are labeled built in Detroit, not the FTC-regulated made in USA.

To bolster its mission, Shinola has partnered with numerous American suppliers: Horween, Chicago’s last tannery, produces its leather watchbands, journals and other leather goods. Steel bicycle frames and forks are handmade by Waterford Precision Cycles of Oshkosh, Wis., and then shipped to Detroit. There are dozens more. “This is not a one-off feel-good entrepreneur going out and making things in the U.S.,” explains Harold Sirkin, senior partner with the Boston Consulting Group in Chicago. “As their supply chain starts to reappear and they start to make more fully made-in-America products, they are creating new businesses.”

In addition to the factory, Shinola has helped revitalize a desolate stretch on the old Cass Corridor, an area better known for prostitutes and drug dealers, by opening a store in an empty factory there last June. Today the spot is thriving with new businesses. “This area was our skid row,” says Jeanette Pierce, director of community relations for D:hive, a nonprofit group that connects Detroit’s resources and businesses. “Sixteen months ago, there were maybe four small shops. Today there are 16 and a brewery.”

The multiplier effect is worth watching. Matthew Clayson, director of the Detroit Creative Corridor Center, credits Shinola’s success as a magnet for attracting new business. Four years ago, he was lucky if he got one call a quarter from a firm interested in setting up shop in Detroit. “Now,” he says, “I get one call a week.”

Recently Kartsotis and Bedrock have begun the process of launching Act II of their made-in-the-USA story. In the space adjacent to Shinola’s Detroit shop, construction is under way on their latest venture, Willys (named after the classic American Jeep), a multibrand store set to open in May. No surprise, it is dedicated to a spectrum of American-made products. Says CEO Bock: “We feel this city has a future.” 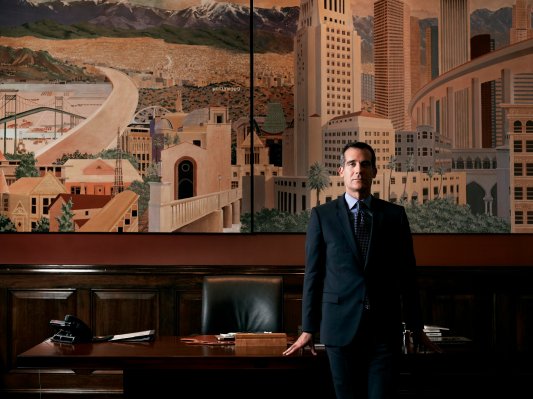