Let’s get the most important point out of the way: I am, as of this morning, officially an Oculus Rift v2.0 owner. Or I suppose you’d have to say pre-owner: though I’ve put money down, the revised version of Oculus VR’s $350 virtual reality headset won’t arrive until mid-summer.

My more intrepid colleague Jared Newman took the plunge yesterday afternoon, just after Oculus VR revealed it was putting version 2.0 of its Oculus Rift development kit up for pre-order (in tandem with demonstrations at the Game Developer’s Conference transpiring in San Francisco this week). We’re not developers, mind you, just virtual reality enthusiasts, and I think I speak for both of us when I say Oculus’ headset is in our top handful of tech-related things to experience this year.

But the image up top isn’t of Oculus’ headset, it’s of Sony’s — unveiled at GDC and codenamed Project Morpheus. Slick as it looks in that shot, Sony says it’s just a prototype without a release timeframe. But as Oculus Rift’s creator Palmer Luckey admits, if a company as powerful as Sony can pair compelling enough experiences with a headset like this, it could be just the shot in the arm the esoteric VR industry needs.

Let’s run through what we know about Project Morpheus, as well as what we’ve learned since Sony’s announcement Tuesday night.

It sounds impressive on paper.

According to Sony Japan honcho Shuhei Yoshida, the visor-style prototype includes a 5-inch LCD capable of delivering 1920 x 1080 pixels (1080p) to each eye (Sony calls it “1920×RGB×1080”). It has a 90 degree field of view; an accelerometer and gyroscopic sensors; USB and HDMI ports; and it works with the PlayStation Camera alongside Sony’s DualShock 4 or PlayStation Move controllers. The headset also features Sony’s new 3D audio tech, capable of generating omnidirectional sound that triggers based on your head’s orientation.

“Morpheus” is a Greek thing.

The headset has Sony waxing existential.

The phrase “virtual reality” is apparently passé, so Sony’s hyping another word to describe the sense of being somewhere else when wearing its headset: “Presence is like a window into another world that heightens the emotions gamers experience as they play,” writes the company, as if describing a Buddhist mindfulness seminar.

Sony says Project Morpheus is designed to work with its PlayStation Camera, released last fall in tandem with the PlayStation 4: “Inertial sensors built into the head mount unit and PlayStation Camera accurately track head orientation and movement so as the player’s head rotates, the image of the virtual world rotates naturally and intuitively in real-time.”

I’ve noticed a few claiming the headset works with Sony’s PlayStation Eye, the older camera designed exclusively for PlayStation 3, but I’ve seen nothing official from Sony on this (many still conflate the PS Eye with the PS Camera, when they’re totally different things). At this point, Sony’s confirmed support for the PS Camera only, and since that peripheral uses a proprietary interface (not USB) to link up with the PS4, that means Project Morpheus is probably going to be PS4-exclusive for the time being.

It may be motion control’s missing link.

For all the Wii’s success (and initial Kinect and PlayStation Move enthusiasm), motion control hasn’t progressed much in recent years, relegated to gaming gimmicks or supplemental mechanics in traditional games that feel forced. Project Morpheus could change this by giving you exactly the sort of interface you’d need, say swinging a virtual sword around without constraints (or a lightsaber, because hello inevitability).

It’s not wireless — yet.

At this point, Project Morpheus requires a USB or HDMI tether, but Sony’s said it hopes to make the device wireless before launch.

It’s almost as good as the Oculus Rift, but not quite.

That’s according to Engadget, anyway, who were fortunate enough to give both headsets a go at GDC. According to Ben Gilbert:

Sony’s confirmed Project Morpheus won’t ship this year, so short of giving it a spin at future trade shows or press events, we’re talking 2015 at the earliest to see if all the fuss pays off.

Because of course it won’t: Sony’s said as much, and after all, the new Oculus Rift devkits only run $350.

You still have to slap a giant clumsy-looking visor/helmet-thingy on your face.

VR headsets are stopgap technology on the road — okay, well down the road — to direct neural interfaces and full-on cerebral manipulation. They’re not new, they’re just getting better at the particular trick they’ve been performing for decades. They’re also arguably as limiting as they are liberating, forcing us to throw general ergonomics out the window in trade for a relatively crude (by movie standards) wraparound experience.

Dr. Richard Marks, inventor of Sony’s EyeToy motion control camera, once told me that any interface you had to wear, say a headset or full bodysuit, would have niche appeal because it involves sacrificing one sort of freedom for another. Virtual reality is getting better, but I don’t see it going mainstream until we’ve conquered the “You mean I have to wear this funky-looking thing on my head?” problem. 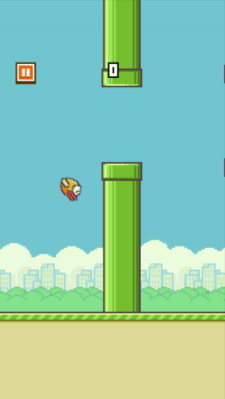 Flappy Bird Will Definitely Be Back, Says Creator, but Not Until It's Done
Next Up: Editor's Pick