11 Lobster Facts That Will Leave You Shell-Shocked

This story has been updated to reflect the most recent two-toned lobster discovery.

Earlier this week, a brown-and-orange lobster turned up at Pine Point Fisherman’s Co-Op in Scarborough, Maine. Turns out chances of finding one of these are 1 in 50 million, and the two-toned coloring may be caused by a genetic mutation. These lobsters also tend to be hermaphrodites, but this one appears to be female, Adam Baukus of the Gulf of Maine Research Institute told New England Cable News (NECN).

We thought that tidbit was as good a time as ever to consider the lobster. Herewith, 11 totally essential facts:

Or so research suggests. But scientists won’t be able to tell how long lobsters really live because traps aren’t designed to catch the largest lobsters. “When we catch one that is 20-30 pounds, it’s because a claw got caught in the entrance of the trap, not inside,” says Robert C. Bayer, executive director of The Lobster Institute at the University of Maine.

“They’re looking for fresh food and what’s around, and if that happens to be another lobster, then it’s dinner,” says Bayer. “One of the reasons lobster culture is not profitable is because they are cannibalistic, and there are lot of expenses that go along with that.”

3. Females are players—and they make the first move.

Not much courtship precedes lobster love-making. Females that have just shed their shells send out a pheromone to let the males know they’re in the mood. Usually, lobsters that shed their shells are vulnerable and could be eaten by other lobsters, but when a female says she’s ready to get it on, the male lobster will usually opt to have sex with her over killing her.

How do they do it? “I would describe it as the missionary position,” Bayer says. Six to nine months later, eggs appear on her tail, and after another six to 9 months, they hatch. A one-pound-and-a-half female lobster can have between 8,000 to 12,000 eggs, each about the size of a raspberry segment. And they could be from multiple fathers. Females are not monogamous.

4. They taste with their legs.

Chemosensory leg and feet hairs identify food. Small antennae in front of their eyes are used for tracking down food that’s farther away. “If you watch a lobster in a tank in a market, you’ll see they’re flipping, looking for food, dissolved substances in the water,” says Bayer.

5. They chew with their stomachs.

The grinding structure for breaking up food is called the gastric mill, kind of like a set of teeth on their stomachs, which are right behind the eyes and the size of a walnut in a one-pound lobster.

6. The green in cooked lobsters is liver.

Well technically, it’s the tomalley—a digestive gland that’s the intestine, liver, and pancreas. And any red things are eggs.

7. They don’t scream in pain when you cook them.

The noise you hear is “air that has been trapped in the stomach and forced through the mouth after being out of water for short periods of time,” says Bayer. Lobsters don’t have vocal chords, and they can’t process pain.

8. One of their claws can exert pressure of up to 100 pounds per square inch.

So they may not feel pain, but they can cause some serious pain. Researchers discovered that after having the lobster’s larger claw, the crusher claw, clamp down on a load cell, a pressure-measuring device. This claw looks like it has molars because it’s used to break up anything hard like crabs, clams, mussels. The other, called the ripper claw or the quick claw, tears softer food like fish or worms.

9. They can regenerate limbs.

“It’s going to take probably a good five years for a one-pound lobster to regenerate a claw that’s about the same size of one that was lost,” says Bayer. But they can do it.

In this March 31, 2011, photo, a lobster is posed next to a golf ball made from ground lobster shells in Orono, Maine.
Robert F. Bukaty – AP

10. Their shells were once used to make golf balls.

Shells left over after lobster processing are usually tossed into landfills. So in an effort to make them worth something and keep the money in the lobster industry, a University of Maine professor created golf balls with a core made out of lobster shells. They’re also biodegradable, designed for golfing on cruise ships or courses near oceans and lakes.

The problem is they only go about 70 percent of the distance of a regular golf ball, so you won’t see them at the U.S. Open anytime soon.

11. Once upon a time, they were the go-to prison food.

In the colonial era, only the poor, indentured servants, and prisoners ate lobsters because they were cheap, too plentiful, and considered “tasteless.” After prisoners in one Massachusetts town got sick of eating them all the time, a new rule said they only had to eat them three times a week. 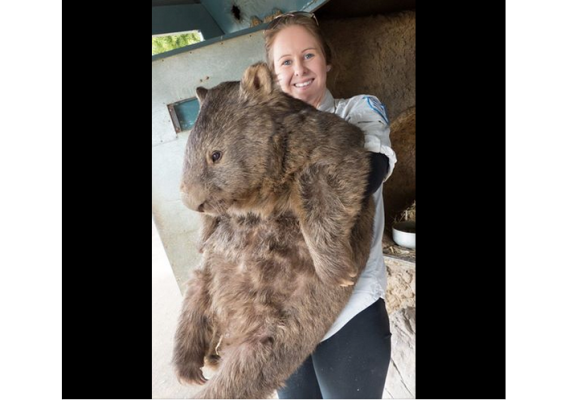 Happy 29th Birthday to What Is Believed to Be The Oldest Wombat in Captivity
Next Up: Editor's Pick