President Barack Obama pledged Tuesday that the United States would not rest until it brought to justice the killer of American journalist James Foley at the hands of the Islamic State of Iraq and Greater Syria (ISIS).

“Rooting out a cancer like [ISIS] won’t be easy and it won’t be quick,” Obama told an audience of veterans and their families at the American Legion National Convention in Charlotte, N.C. a week after the extremist group released a video showing the graphic execution of Foley by an ISIS fighter. These were Obama’s first public comments on the conflict since returning from vacation on Martha’s Vineyard.

“Our message to anyone who harms our people is simple. America does not forget, our reach is long, we are patient, justice will be done,” Obama said, referencing Foley’s killing. “We have proved time and time again we will do what’s necessary to capture those who harm Americans to go after those who harm Americans. And we’ll continue to take direct action where needed to protect our people and to defend our homeland.”

As he weighs expanding the fight against ISIS into Syria, Obama warned that “history teaches us of the dangers of overreaching and spreading ourselves too thin and trying to go it alone without international support, or rushing into military adventures without thinking through the consequences.” White House Press Secretary Josh Earnest said Tuesday that Obama has yet to decide whether to authorize the expansion of the weeks-long American air campaign in Iraq against the group.

Obama said that the strikes against ISIS have been limited to protecting U.S. forces and diplomats in Iraq, reaffirming that U.S. troops would not be sent back on the ground beyond an advisory capacity.

“Let me say it again: American combat troops will not be returning to fight in Iraq,” he said. “We’ll not allow the United States to be dragged back into another ground war in Iraq because, ultimately, it is up to the Iraqis to bridge their differences and secure themselves.” 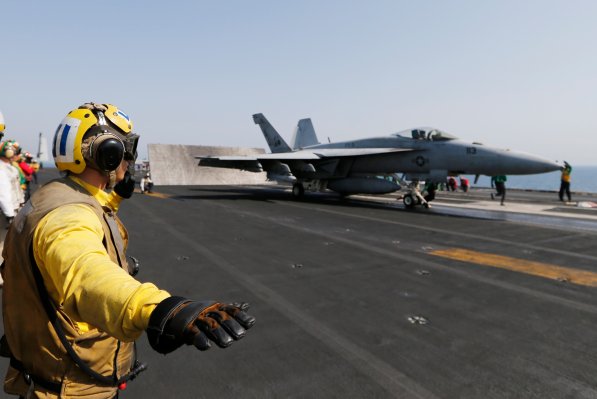 U.S. Weighs Strikes in Syria
Next Up: Editor's Pick