The Sheer Amount of Wool on This Sheep Baaa-ffles Farmers

Two Tasmanian farmers were in for a surprise Sunday when a wild, impossibly fleecy sheep wandered onto their land. His name is Shaun, and after going six years without a haircut, they think he could be a contender for a world’s wooliest sheep record.

“I just couldn’t believe it, I just could not believe a sheep could have so much wool,” Netty Hazell, one of the farmers, told Australian Broadcasting Corporation.

Netty and Peter Hazell estimate that Shaun has been lumbering around with at least 20 kilograms (about 55 pounds) of fleece. They plan to shear him soon to see if he is, in fact, even woolier than the late Shrek, that was found hiding in caves in New Zealand in 2004 and yielded 27 kilograms of fleece (about 59 pounds). The competition is sure to be a close shave.

Shrek the merino sheep waits in a pen as a large crowd gathers before a charity function in Cromwell, New Zealand, April 28, 2004.
Simon Baker SB/CP – Reuters 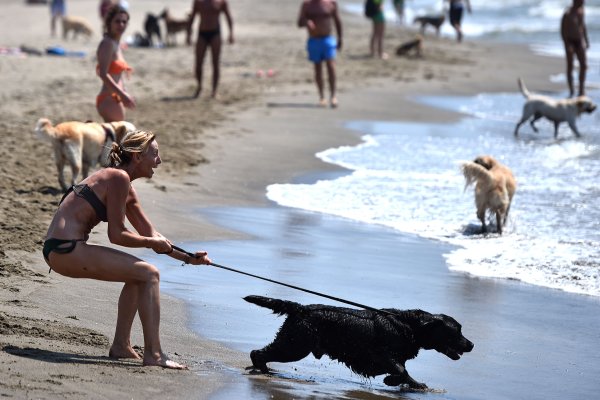 This Italian Beach Says 'Si, Per Favore' to Dogs
Next Up: Editor's Pick