Breaking Bad Ends Its Emmy Run on a High Note

Vince Gilligan, center, and the cast and producers of Breaking Bad accept the award for outstanding drama series at the 66th Primetime Emmy Awards at the Nokia Theatre L.A. Live on Monday, Aug. 25, 2014, in Los Angeles.
Vince Bucci—Invision/AP
By Nolan Feeney

Seth Meyers joked in his opening monologue that the 2014 Emmys marked the year cable television really felt the heat from Netflix, but it was still AMC’s Breaking Bad that was the night’s big winner — both in terms of major awards and in terms of the show’s most viral moments.

But numbers aside, Breaking Bad still provided plenty of the show’s most memorable moments. The most GIF-worthy of all was Cranston’s lip-lock with Veep‘s Julia Louis-Dreyfus, whose two-part set-up was funnier than most, if not all of Seth Meyers’ jokes. The speeches, if far less outrageous, stood out as well: Anna Gunn’s admiration for her co-stars, Aaron Paul’s Jesse Pinkman-like reaction to winning and Cranston’s inspirational pep talk (“Take a chance, take a risk, find that passion”) reminded Breaking Bad die-hards that the cast probably had just as difficult a time saying goodbye to the show as fans did.

It may have been a show about murderous meth dealers — and many would argue True Detective‘s Matthew McConaughey deserved Cranston’s trophy more — but it’s not a stretch to say Breaking Bad helped give the 2014 Emmys a real heart.

You almost don’t feel bad that Jon Hamm still doesn’t have an Emmy. 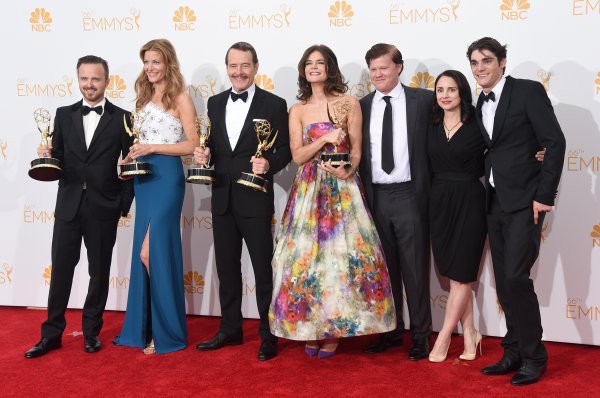 Emmys: Much Ado About TV
Next Up: Editor's Pick