Just minutes after Jimmy Kimmel roasted Ricky Gervais onstage at the Emmys — “Where’s Ricky? Now that’s a television face,” he said, contrasting the comedian with handsome Matthew McConaughey, “not even really a television face, it’s a Netflix face” — Gervais appeared quite literally as the face of Netflix in a commercial for its original programming.

“You know when you’re watching your favorite Netflix show,” Gervais asks the camera from his seat on a couch, “and after five straight episodes, it’s like, you wanna be in it?”

Next thing you know, he pops up on the sets of Netflix shows from House of Cards to Lilyhammer to Orange Is the New Black, crumbling under the hostility of the Litchfield inmates.

Gervais himself stars in Derek, a British import streaming on Netflix, for which he was nominated in the category of Best Actor in a Comedy Series, which he has already lost to Jim Parsons for his work on The Big Bang Theory. What are the odds of Netflix paying actors $1 million per episode anytime soon? 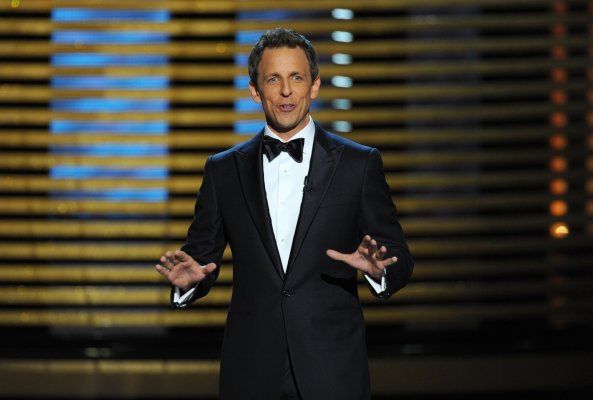 Watch Seth Meyers' Opening Monologue at the Emmys
Next Up: Editor's Pick