That being the case, you might think a cache of 40 wine jars unearthed from a room in the Bronze Age Canaanite palace at Tel Kabri, which stood more than 3,600 years ago in what’s now modern Israel, would be no big deal.

But you’d be wrong. “In the past,” says Koh, lead author of a paper describing the discovery in the latest issue of the journal PLOS One, “we wouldn’t have been able to say much more than ‘this is a bunch of containers that held wine.’”

Thanks to an unprecedentedly sophisticated analysis of the deposits inside those containers, however, Koh, who has a joint appointment in Brandeis’ Classical Studies and Chemistry Departments, along with two colleagues, can conclude much more, specifically that the wine was flavored with — deep breath, now — honey, storax resin, terebinth resin, cedar oil, cyperus, juniper and possibly mint, myrtle and cinnamon as well.

Not only that: on one side of the room, the wine was mostly unflavored; in the middle, it contained about half that long list of ingredients; and in a small adjoining room it contained them all. In fact, Koh and his colleagues think this wasn’t really a storage facility at all. It was a sort of kitchen, where wine was brought in from the surrounding area — the jars were made from local clay — and a brewmaster of some sort subtly flavored them before they were served in the banquet hall next door.

“We’ve known about the existence of these complex wines for a long time,” says Koh, “and we’ve even got recipes. But to find examples of the actual wines, that’s what makes the science so compelling.”

The additives aside, the wine itself was the same from jar to jar. That, plus the fact that wine was generally not saved from one season to the next, led Koh and his co-authors to conclude that it was all from a single year’s vintage. And that particular vintage clearly never made it into the banquet hall — almost certainly because an earthquake collapsed the walls, breaking the jars and spilling what was inside.

Although this palace stood — and perhaps fell — on what is now Israeli soil, it wasn’t an Israelite palace. Biblical chronology suggests that the Jews were slaves in Egypt at the time. During the Exodus, when Moses led his people to the Promised Land of milk and honey, it was people like these winemakers they ended up conquering.

The excavations at Tel Kabri aren’t over. Koh and his team will return next year, and, he says, “We’re confident we’ll find other rooms, maybe with jars of olive oil. We might also find statues, jewelry, the kind of stuff the public likes.”

That’s not what the archaeologists care about, however. “We’re more interested,” Koh says, “in knowing how people lived.” 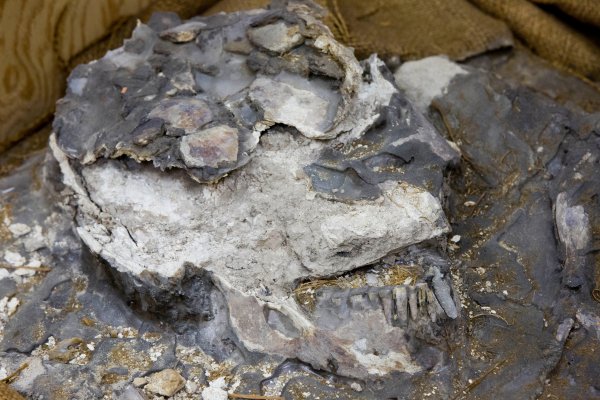 Museum Finds Misplaced Ancient Skeleton in Own Basement
Next Up: Editor's Pick