The past year was a tough one for Hollywood when it came to saying goodbye to all the great talents who passed away. While pop star Sara Bareilles sang a touching rendition of the Charlie Chaplin classic “Smile,” the Emmy Awards acknowledged James Avery, Maya Angelou, Lauren Bacall, Philip Seymour Hoffman, Casey Kasem, Don Pardo, Harold Ramis, Mickey Rooney, Elaine Stritch, Shirley Temple and many more before ending with a special tribute to Robin Williams from the late actor’s friend Billy Crystal.

“He was the greatest friend you could ever imagine,” Crystal said in the tribute. “It’s very hard to talk about him in the past because he was so present in all of our lives.” 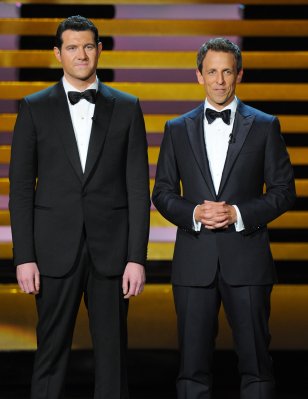 Watch Seth Meyers and Billy Eichner Harass People on the Street About the Emmys
Next Up: Editor's Pick