At first listen, “Super Pretty Naughty” by Canadian rapper Buck 65 sounds like a studied replica of all the club-friendly sounds of Top 40 favorites. But take a closer look at the lyrics — which include absurd phrases likes “If people could put rainbows in zoos, they would do it,” and “Hey do you like sports? / Also did you used to be a baby?”— and it becomes clear this is no ordinary pop song.

In fact, for all its nonsensical YOLO-pop splendor, “Super Pretty Naughty” has dark origins. “I think of this song as the sound of me hitting rock bottom, more than any of the heavier, darker songs on the album,” the rapper says of the track, which arrives ahead of his upcoming “divorce record” Neverlove (out Sept. 30) and premieres exclusively at TIME today. “I wrote this song at a time when I really needed a break from feeling terrible.”

Wracked by anxiety and “desperate for affection” after his wife left him, Buck met a girl and tried to impress her by writing her a song. He wrote down everything she liked about her favorite dance tracks and Frankensteined those elements into one track: hand-claps, la-la-la lyrics, slick synthesizers, pre-chorus buildups, bass drops, four-on-the-floor beats and references to birthday cakes, rainbows (“I wasn’t sure what she meant by that,” he says) and getting dressed up. “More than anything, the song came from wanting to make this girl like me,” he says. “I just wanted the hugs and kisses.”

The result is no parody. While Buck tries to break down today’s biggest hits into their bare, most instantly gratifying essentials, the song comes from a place of reverence for pop music, not ridicule. Buck says the track was inspired by classic house music as well as the sounds of Robyn, Iggy Azalea and Sia (who knows a thing or two about big, sad pop songs). Because Sweden has such a reputation for exporting great pop music, he even hired Swedish songwriter-producer Mårten Tromm to work on this song and others on the album. “There are formulas that are proven to work,” he says. “The thing is, that formula is more complex than most people realize, especially on the production side of things. That big sound is not easy to achieve.”

Even the seemingly silly lyrics were labor-intensive. Buck says he mixed and matched words from his dreams, online translators (he passed phrases through multiple languages and back like a global game of telephone), terribly subtitled movies and overheard conversations to concoct a song that’s both hedonistically festive and unexpectedly poignant. “It’s very difficult to just think up things that are total nonsense,” he says. “I’ve tried and failed many times.” 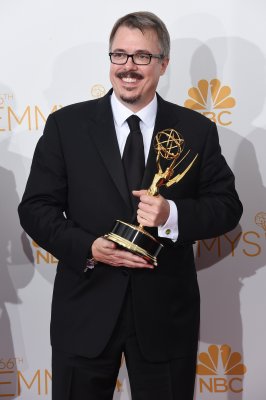 Vince Gilligan Thought True Detective Would Win the Emmy for Best Drama
Next Up: Editor's Pick