Knock Back a Few Rounds With The Uncles of March Madness

When Lundquist—the avuncular CBS broadcaster who has called some of the most iconic moments in sports over the last 30 years—and his longtime college hoops partner Raftery get together, the anecdotes flow like the best beer on tap. And they often acknowledge on the air, wink-wink, that once the game is over they’ll get together and hail the bartender, to share a few more laughs. They’re back together again Thursday for the start of the NCAA Tournament; they’re calling six games through two rounds over the next few days.

(MORE: March Madness: Make Sure to Watch These Five Games)

Verne first met Billy over 30 years ago, when they did a few college games together for CBS. They hit it off right away. But they were never regular broadcasting partners. One night in the ’80s, Verne was in New York City, and he called Raf—as everyone calls him—to see what he was up to. Raftery was working some games at Madison Square Garden, but he had a plan. “He said, ‘well, good, come on down here, I’ll get you a credential,'” Lundquist recalls. “‘We’re doing a double header then we’re going to dinner.’ I said, ‘Bill, dinner’s not going to start until 11:30.’ And he says, ‘your point?'”

They went over to Runyon’s, the legendary New York watering hole where athletes and writers and other media types could actually co-exist in a normal setting, rather than the stilted press conference rooms of today. “So we walk in,” Lundquist says. “And it’s not that we’re going to sit down and have dinner right away. We’re going to have a libation or two. Or pretty soon we’re counting on our hands.

(PHOTOS: 11 Players You Need to Watch in the NCAA Tournament)

Lundquist: “So here’s what I hear. Ring. Ring. Ring. Joanie [Raftery’s wife]. ‘Hi. I just wanted to call and let you know. I’m going to be home a little late.'”

While Raftery is a legendary barfly, he admits to slightly overplaying that image, because he knows it entertains his fans. And after all, if Raftery was overindulging, he wouldn’t be so good. Raftery, who used to coach at Seton Hall, breaks the game down like a surgeon, but in a layman’s language. For years, he’s been known as one of the hardest working, most prepared broadcasters in the business.

But he’s also the nutty uncle you want to hang out with, shouting “onions” when a player takes a charge (translation for those not fluent in Raf-speak: that guy has some balls on him), or “with a kiss!” after a bank shot. Or his signature exhortation: At the beginning of the game, right after the tip, Raf religiously notes that the defense is in “man-to-man!”—March has no sweeter sound.

The players are the stars of March Madness. But as fans consume dozens of games over the next three weeks, the announcers become part of the bloodstream. Verne and Billy, who were finally paired together by CBS Sports boss Sean McManus for the 2000 tournament—you’d think they’ve worked together much longer—just click. What’s better than two older gentleman—Verne is 73, Raf is 70—who have built a comfort level with each other that translates into the living room, calling a do-or-die March Madness game? Who’s playing in the Sweet Sixteen tonight? It’s a Verne-and-Billy game? Nice.

So what’s the secret? Ian Eagle, a rising CBS play-by-play star who worked with Raftery for years on New Jersey Nets games, has studied Verne and Billy. He joins the table.

“It’s about camaraderie, chemistry, they genuinely like each other,” Eagle says. “And that shows up on the air. Verne is fully engaged in the event that he’s covering. It’s not artificial. It’s real. Bill is the person, on the air, who he is off the air. He’s not playing a role. There are a lot of guys out there that are. He’s not. I think fans figure out if the essence of you is coming through. When it’s not contrived. And I learned it from both of them. Because, ultimately, if the essence of you isn’t coming through, it’s going to come back and bite you at some point.

“There’s incredible balance to the relationship,” Eagle goes on. “If you go out to have dinner with them, it’s the same feeling. You can lead one into the other story wise, they can finish each other’s sentences. That’s real. You can’t make that up. Look, Bill’s worked with many different partners over the years. Vern’s worked with many different partners. And the reason they are so good is that they do make the people around them better. Now take these two broadcasters, put them together, and you’re talking about the industry standard.”

Raftery reaches into his pockets. “I don’t have any money on me.”

Eagle: “I’m going to have to shower.” Lundquist bellies out a loud, slow “Ha! Ha! Ha!” It seriously sounds like your grandpa’s guffaw.

Eagle is not allowed to leave this conversation without doing his Raf impression. During one Nets game back in the late ’90s or early 2000s, Eagle yelled “Jambalaya!” in Raftery’s voice after Kerry Kittles, a New Orleans native, sank a nice shot. It was just a natural Raftery line: spontaneous, silly, but it hit the spot. The producer gave an oblivious Raf kudos on the call.

For Eagle, picturing a setting for his impression is easy. It’s late, at some hotel bar after a game, and Eagle, 25 years younger than Raftery, wants to head up to bed. “Bird, where the f–k are you going?” Eagle says in Raf’s familiar vocal twinge. “You know how to ruin a good party, Bird. Little d–k.”

Now, it’s Raf’s turn for a story, about the subtle way Verne can tweak him on the air, giving the audience a nice payoff. The pair was doing a Louisville game a few weeks back, and during the opening clips before the tip, footage of Cardinals sharpshooter Luke Hancock came on the screen. “And like, out of the blue, I went ‘Luuuuuke. Luuuuke.’ I never rehearsed it, never even thought about it, until I saw the video. Like, stupid.

“And he said, ‘Folks, you’re going to be hearing a lot more of that later. We’ll be back after these words.’ The way he handled it was perfect. Like, I’m stuck with this asshole for a couple of more hours.”

Hopefully, Verne and Billy will be stuck with each other for a couple of more years, at least. “I soon will enter the final year of a three-year contract,” Lundquist says. “I do know you never want to assume a thing.” Lundquist’s critics feel he’s lost a step, especially when calling SEC football games for CBS in the fall. And SEC football fans, you may have heard, are somewhat rabid. “I’m quite aware that we have sometimes vitriolic responses to what we say on the air,” Lundquist says. “It kind of comes with the territory. And I’d be less than human if I said it didn’t bother me. I try not to let if affect me. I don’t read it. I’ll read some of the blogs. But I’ve learned, over the years, I think, to not go beyond the last sentence.” That is, into the anonymous comments section: “Because then it get treacherous.”

Criticizing Lundquist is fair. But without question, his call of last year’s Iron Bowl miracle, when Auburn’s Chris Davis returned a missed field goal from the back of the end zone for a 109-yard score to give the Tigers that shocking win over Alabama, was pitch perfect: “Chris! Davis! No flags! Touchdown, Auburn! An answered prayer!”

As a career capstone, how about giving Verne and Billy a crack at calling a Final Four on TV? McManus, the chairman of CBS Sports, answers the question as you’d expect: He’s happy with the team he has in place—Jim Nantz, Greg Anthony, and Steve Kerr get the assignment this year—and foresees no changes. But McManus did leave the classic political opening: You can’t guarantee anything this business.

Verne and Billy on the title game? Come on, that’s an easy one. The fans would celebrate it.

That move wouldn’t take any onions.

MORE: Wichita Can’t Get No Respect 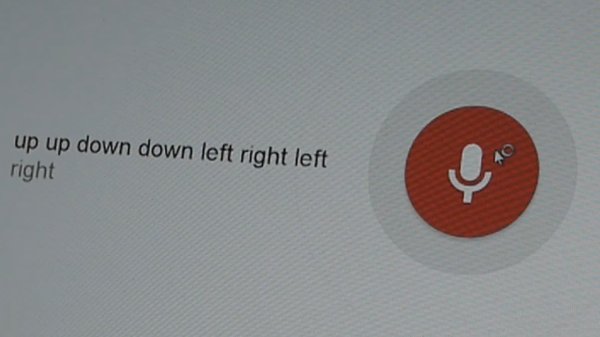 30-Second Tech Trick: Use the Konami Code for Free (!!!) Google Searches
Next Up: Editor's Pick