This Year's VMAs Were All About Empowered Women

From Nicki Minaj’s defiant twerking to Taylor Swift’s sly role-reversal to Beyoncé singing with the word “FEMINIST” emblazoned behind her, empowered women stole the spotlight at this year’s MTV Video Music Awards. Not only were their performances the best (sorry, Usher), but their message was clear:

We’re taking over. And we’re not sorry.

When Nicki Minaj’s “Anaconda” video dropped last week, bloggers couldn’t help but notice that not a single man appeared in the video—except for Drake at the very end. (And let’s be fair: His mere presence is justified by her pleasure in teasing him.) Minaj has always done what she wants whenever she wants without any consideration for anyone, let alone the opposite gender. The same is true in this video—all that glorious twerking in the jungle isn’t for the sake of a man but for Minaj herself. And even when Minaj does proceed to give Drake a lap dance at the end of the video, it’s all on her terms. When he finally tries to reach out to touch her bottom, she slaps his hand and struts away, leaving him miserable with his head in his hands.

Her VMAs performance was similar: all her backup dancers were female. And while she didn’t get the chance to utter some of the more choice lines from “Anaconda,” her dancing alone gives us the sense that Minaj could not care less what any man thinks.

Taylor Swift, who recently declared herself a feminist, eschewed tradition in her “Shake It Off” performance. In an interesting role reversal, all of Swift’s backup dancers were men while women sang backup and played instruments. It’s not a completely original move: many divas have been carried onstage by an entourage of men before. But when Swift was given the option to jump off a platform into the arms of the guys below her, she decided to walk down the stairs herself instead. The move was a nod to her clumsiness, but T-Swift was also sending the message that she doesn’t need to depend on a man to catch her either.

For those who haven’t seen the music video for “Black Widow,” it’s a re-imagining of Kill Bill, one of the most iconic female empowerment flicks ever made. (And reminiscent of when Lady Gaga and Beyoncé teamed up for the “Telephone” music video, referencing Kill Bill as well as Thelma & Louise). The song has similar themes of women-on-man vengeance, and the music video—along with the VMAs performance—celebrates girl power in a way rarely seen in pop culture. Heck, maybe Iggy Azalea should play Spider-Woman on the big screen.

I’ve written before about how Beyoncé’s latest album, “Beyoncé,” is basically a lesson in modern feminism. That continued to be true Sunday night during her finale performance when she sang the anthems that women across the world have had on repeat since the surprise album drop in December. These are songs that remind women not to obsess about looks and perfection (“Flawless”), sexual pleasure ought to be a two-way street (“Blow”) and pleasing your man isn’t an anti-feminist endeavor (“Partition”).

But the peak came during “Flawless,” which began with the recording of Nigerian writer Chimamanda Ngozi Adichie’s call to feminism (which is also featured in the album). Her words flashed in bold letters behind the singer: “We teach girls that they cannot be sexual beings in the way that boys are. We teach girls to shrink themselves, to make themselves smaller. We say to girls, you can have ambition but not too much. Aim to be successful, but not too successful otherwise you will threaten the man.”

The word “feminist” then flashed on the screen and lingered long enough for Beyonce’s silhouette to pull into the frame—and for her to be photographed with the words behind her a few thousand times.

Think about that: feminist sat written in huge letters on a screen behind the most popular pop star in the world on an awards show whose main demographic is tweens and teens. The 2013 VMAs may have been the year of performances that gave us pause for all of the wrong reasons, but this year’s VMAs were something completely different. 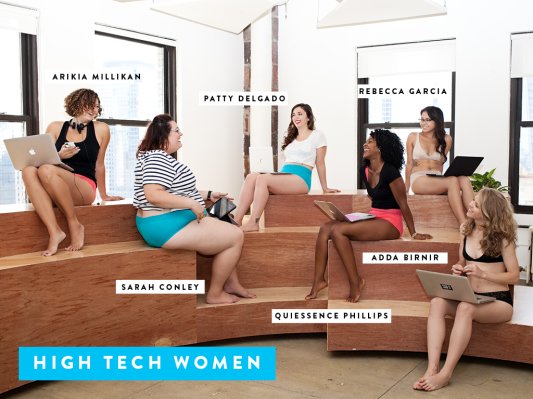