When you’re accepting the Michael Jackson Video Vanguard award at the 2014 MTV Video Music Awards, your performance better be something big — say, performing a medley of the majority of your “visual album” in roughly 20 minutes. Beyoncé closed out the show by running through most of the songs on her self-titled surprise release, which dropped at the end of last year with an accompanying music video for each song (as vanguards do).

With the exception of her jewel-encrusted leotard, Beyoncé’s performance was otherwise unflashy — in the best way. She passed on costume changes and complex stage designs for simple showmanship and solid choreography while husband Jay Z and daughter Blue Ivy looked on from the crowd. If you ever wonder why devoted fans deify her with nicknames like Queen Bey and Beysus, this performance makes it clear.

And if you wanted to know anything about the state of Beyoncé’s marriage (or at least what they want you to think), take a hint from Jay, who presented her with the award while planting a kiss and calling her “the greatest living entertainer.” Um, what breakup? 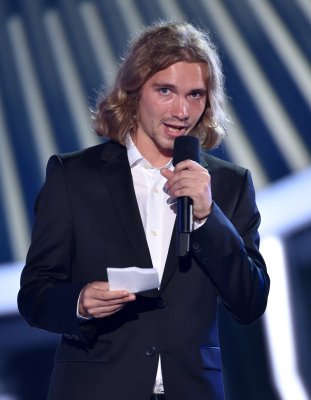 Who Was the Guy Who Accepted Miley Cyrus' Award at the VMAs?
Next Up: Editor's Pick