Beyonce performs onstage during the 2014 MTV Video Music Awards at The Forum on Aug. 24, 2014 in Inglewood, Calif.
Christopher Polk—MTV1415/Getty Images for MTV
By Melissa Locker

It’s the most magical time of the year for people who like sequins, sparkles and synchronized dance moves. That’s right — it’s the 2014 MTV Video Music Awards, and while we didn’t expect any twerking teddy bears this year, we did expect Nicki Minaj, Usher, Maroon 5, Iggy Azalea, Five Seconds of Summer and, of course, Beyoncé herself.

Unlike most awards shows, no one really cares who wins — but the performances certainly provided good fodder for ye olde water cooler tomorrow, or at least helped us better understand what the kids are always talking about around the dinner table. (5 Seconds of who?)

If you couldn’t be bothered to spend two and a half hours of your limited lifespan on the couch (after all, YOLO) watching young women wear sparkly onesies while lip-syncing their mega-hits, here’s what happened on the VMAs:

Second Most Important Realization: Your favorite Pretty Little Liar Lucy Hale had two costumes changes by 15 minutes into the pre-show. (Third most important realization? This.)

Best Reason to Fire Your Stylist: Fashion is cyclical and all, but if the VMAs gave prizes for reasons to fire your stylist, they would have handed them out on the Red Carpet, when everyone in the blogosphere simultaneously tweeted that Amber Rose showed up in a nearly identical nearly nude dress to the one Rose McGowan wore to the VMAs in 1998. Then again, her husband Wiz Khalifa wore a shirt printed with a suicide prevention statement, so there’s that.

The First Award: On the Red Carpet, Five Seconds of Summer took home the night’s first award: Best Lyric Video, which is one of those videos you inadvertently click on YouTube thinking it’s the real video. Apparently, they give awards for those now.

Important Hint-Dropping: Gwen Stefani announced that she might be working on new music.

Fingers Crossed: “I won’t fall off the stage… I hope.” — Iggy Azalea

Hanging Up the Unitard: Beloved songbird Miley Cyrus announced that she has retired (retwired?) her twerk, because, “It’s not about twerking — it’s about music.” Guess she’ll have to leave the cultural appropriation to Taylor Swift this year.

Red Carpet Performances: Fifth Harmony weren’t quite famous enough to be allowed to perform inside the Forum, but they did get to bust out their synchronized moves on the red carpet. Similarly, Charli XCX was given the opportunity to perform her hit from The Fault in Our Stars soundtrack, “Boom Clap,” and gave the pre-show performance the respect it’s due by wearing a peignoir and mini-skirt and not giving a damn in the best rock fashion imaginable (and earning our love and respect for life). Sorry, Charli, that everyone is sick to death of “Fancy” — otherwise you might be allowed to play inside with Iggy Azalea.

Creepiest Comment: “Your skin looks nice,” said Sway to Rita Ora. Is he planning on wearing Rita Ora to the next VMAs?

Biggest Head Scratcher for Anyone Over the Age of 17: Who is Becky G? MTV gave the pint-sized star the full-court press and more screentime than J. Lo, but only the tweens know the true greatness of “Shower.”

Best Homage: Katy Perry rolled up to the Red Carpet fashionably late and with none other than grill-sporting rapper RiFF RAFF (a.k.a. Jody Highroller) in tow, wearing matching head-to-toe rhinestoned and studded denim ensembles in an homage to the outfits worn by Britney Spears and Justin Timberlake to the 2001 American Music Awards. Classy, yet also not at all.

The Big Opener: Ariana Grande wore her trademark high ponytail, go-go boots and a sparkly swimsuit romper thing to sing “Break Free,” then was quickly blown off the stage by the fierce beats of a bleeped-out version of Nicki Minaj‘s “Anaconda.” The spectacle was filled with twerking, floor-writhing, booty rubbing and absolutely no snakes. That segued into “Bang Bang,” with Jessie J showing side hip, Grande wearing a different romper-go-go boot pairing and Minaj holding her dress together with her hands. Wardrobe malfunction or fashion forward? We may never know, but we do know that Minaj was the consummate professional and just let the show go on. We also know it was all a bit too much for Rita Ora.

Best Female Video: Katy Perry and Juicy J took the prize for “Dark Horse,” which means Juicy J just needs an Oscar and he will have EGOT’d. (Just kidding!)

Best Safety Video: Taylor Swift performed her latest single “Shake It Off” with a Material Girl-worthy troupe of tuxedoed men. Halfway through the performance, it looked like she was going to get in touch with her inner cheerleader and jump off a platform into the waiting arms of her beaus, but instead decided to walk down the stairs. (It was a nicely dorky shtick.) Safety first, even at the VMAs. Guess someone learned a valuable life lesson from Miguel.

Best Male Video: Ed Sheeran won for “Sing”. Chelsea Handler introduced him. Not much to say beyond that.

Best Pop Video: Ariana Grande took home the Moon Man for “Problem,” and gave a quick shout-out to Iggy Azalea for appearing on the track. Iggy could barely manage a smile.

Best Political Moment: Common came out to remind the gathered tweens and celebs and assistants to the stars that “hip-hop has always presented a voice for the revolution” and requesting a moment of silence for Mike Brown. The sentiment was solid, but in that crowd, the cameraman had no choice but to cut to Snoop Dogg flashing a peace sign.

Best Hip Hop Video: While there was some hope that Kanye West would win and Kim would accept the award and make a poignant speech on his behalf, Drake took the title of Best Hip Hop Video for “Hold On We’re Going Home,” but couldn’t make it to the show, so Common took the Moon Man home with him and will definitely give it back later when Drake starts returning his calls.

Best Presenters: The cast of Orange Is the New Black came out in their glammed-up best to introduce Usher and used the opportunity to remind the fittingly captive audience that the VMAs are a lot like prison.

Best Rock Video: Sitting next to her BFF Taylor Swift, Lorde attempted to graciously accept her Moon Man for “Royals,” but spent the entire time on stage staring into the wrong camera, asking which was the right camera, swearing, apologizing for swearing, and generally reminding the world that she is just 17 years old. Also, didn’t “Royals” come out in 1902? How is it still eligible? Also also, is “Royals” a “rock” song? Anyway, hopefully Lorde will never get any better at accepting awards.

Best Way to Make Your Audience’s Parents Feel Old: Two humans born in the ’90s — Chloe Moretz and Dylan O’Brien— introduced a group of children born in the ’00s (well, not quite) — 5 Seconds of Summer — to play .

Worst Segue: Out of nowhere the show cut to an incredibly brief (23 seconds!) montage of photos of Robin Williams while Coldplay’s “Sky Full of Stars” played before abruptly cutting to a style file about Iggy Azalea’s hairdo.

Cutest Audience Cutaway: While Iggy Azalea and Rita Ora performed “Black Widow” the camera cut to Charli XCX singing along to every word. There was also a quick cut to Taylor Swift dancing, which is undoubtedly in GIF form and heading to a Buzzfeed post near you.

Most Bored Audience Award: While Charli and Taylor were having fun, Katy Perry and Sam Smith were not feeling it:

Best Throwback: Maroon 5’s inaugural VMA performance seems like a nice time to take a little trip down memory lane to that time in 2011 when Adam Levine tweeted this:

Technically speaking, the band performed outside the Forum, so that line in the sand still sands.

Video of the Year: After a very unappreciated (albeit unfunny) Jimmy Fallon monologue, the award for Video of the Year was presented to Miley Cyrus for “Wrecking Ball.” While Cyrus was in attendance, she opted not to pick up the award herself. Instead, she pulled a Marlon Brando (Google it, kids), sending a well-spoken young man named Jesse on stage in her stead to raise awareness for the plight of homeless youth. While Cyrus sat on the sidelines and cried like a proud stage mom, Jesse read a speech and directed fans to Cyrus’s Facebook page to make donations. This is quite a change from Cyrus’s performance at last year’s VMAs.

Beyoncé Time: Despite being shut out in every category, Beyoncé delivered a mind-bogglingly perfect medley of tracks from her self-titled album, dancing around the stage in a bejeweled bodysuit that Ariana Grande just wishes she could fill. As Jay Z and Blue Ivy watched from the sideline, Beyoncé was clearly having more fun than anyone in the room. She giggled while singing “surfbort,” smiled into the camera while straddling a stripper pole, invited the audience to singalong to “Drunk in Love,” got the crowd on their feet to clap along, and laughed while singing the “Flawless” remix with her baby dancing along in the front row. (Blue can show this video to her therapist to prove that she had a very normal childhood.) To cap it all off, Jay brought Blue Ivy on stage with him to present his wife with the Michael Jackson Video Vanguard Award, dubbing her the “greatest living entertainer.” If that wasn’t enough, Blue said, “Good job Mommy,” and the audience couldn’t help but start chanting “Beyoncé! Beyoncé!” and even Queen Bey couldn’t hold back the tears at that point, thanking everyone while genteely dabbing her tears away and gesturing her husband backstage with a head nod.

In short: God save the Queen. 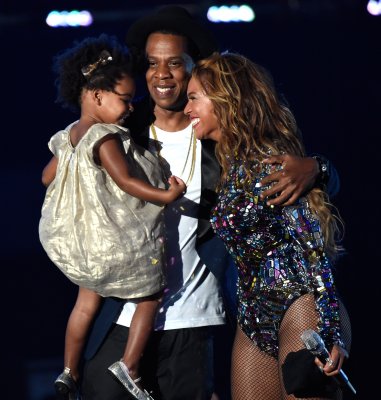 Watch Beyoncé and Jay Z Try to Shut Down Divorce Rumors at the VMAs
Next Up: Editor's Pick