In June, when fighters from the Islamic State of Iraq and Greater Syria (ISIS) attacked the Iraqi village of Amirli, 45-year-old teacher Qasim Jawad Hussein was one of hundreds of villagers who rushed to pick up their weapons to fight alongside police and other Shi’ite Turkmen villagers as they clashed with the Sunni extremists.

“We tried to leave the village and we saw [ISIS’] Hummers and their black flags. We were taken by surprise,” said Hussein on a crackly cell phone from Amirli, which remains under siege. “Then I heard fire from the next village over. They were fighting with ISIS. So we went back to get our guns.”

But their collection of aging Soviet rifles has been no match for ISIS’ looted arsenal of American weapons and armored vehicles. Amirli has been under siege for more than two months, and supplies are dwindling.

“We are asking Muslims, Christians, anyone — what we really need is milk for the children,” said Hussein.

Hussein said the militants are just few kilometers from the village, and the residents have organized watches of 200 men each working in shifts, fearing that the militants will storm Amirli.

“The situation of the people in Amirli is desperate and demands immediate action to prevent the possible massacre of its citizens,” the U.N. Secretary-General’s special representative for Iraq, Nickolay Mladenov, said in a statement Saturday.

The Turkmen, who have linguistic and cultural ties to Turkey, have lived in northern Iraq for centuries and are both Shi‘ite and Sunni Muslims. They stake claim to the oil-rich city of Kirkuk, and populate villages throughout the Kirkuk governorate and further south. In June, many of those villages came under attack by ISIS. Residents told troubling stories of their own Arab neighbors turning on them.

“For two months, ISIS has targeted the Turkmen areas, starting with Tal Afar, Mosul, Tuz Khormato and now Amirli. So I’m worried for the future of the Turkmen people,” said Ali Mehdi, a spokesperson for the Iraqi Turkmen Front, a political organization that seeks to represent the interests of the Turkmen minority in Iraq.

The fear now is that Turkmen residents of Amirli will suffer the same fate as the Yezidis of Sinjar, a minority religious group in Iraq who recently fled to a mountaintop in fear of ISIS fighters, creating a potential humanitarian catastrophe before international efforts were launched to come to their aid. As Shi‘ite Muslims, Amirli’s Turkmen are seen as apostates by ISIS militants, who practice a strict — some say distorted — version of Sunni Islam. Like all those who don’t practice ISIS’ version of the faith, the Shi‘ite Turkmen are a target, and as a small and unique minority, they are particularly vulnerable. Some Iraqi Shi‘ite militias have said they will mobilize to help Amirli, but if the militias do try to rescue the residents of Amirli, they will likely be no match for ISIS. On top of that, most of the Shi‘ite militias are Arab, not Turkmen, and are organized to protect their own neighborhoods, leaving the Turkmen largely on their own.

“Shi‘ite militias are organized as local defense forces. Not like ISIS, which is one coherent military organization. There’s one guy at the top” of ISIS, says Christopher Harmer, a senior analyst with the Washington, D.C.–based Institute for the Study of War, who served several tours with the U.S. Army in Iraq.

“Is it possible that the Shi’ite militia could go up there and try a rescue operation, yeah, sure, but the fact is that if the Shi‘ite militia went head-to-head with ISIS, they would get crushed. And I think they know that,” said Harmer.

Both Mehdi and Hussein are calling on the U.S. to intervene. However, as of yet, there have been no air strikes like those carried out by American warplanes in Sinjar. Those strikes allowed local Kurdish forces to open a corridor, allowing many Yezidis to escape.

“Why didn’t the U.S. do anything for this village? Why does the U.S. Air Force go to [the] Mosul Dam, Erbil, but they don’t come here?,” asked Mehdi. “That makes us think the U.S. doesn’t care about the Turkmen.”

But the Americans also have a long-standing relationship with the Kurdish forces, which operated around Sinjar, and it would be difficult for U.S. Special Forces to coordinate with Shi‘ite militias, some of which were sometimes lined up against American forces during the U.S. occupation of Iraq. On top of that, the plight of the Shi‘ite Turkmen may simply not have the appeal of the Yezidis, whose little-known faith and desperate isolation on a besieged mountaintop sparked broad sympathy and interest. Harmer says that could change with the U.N.’s recent statements, but it would be a tough decision for Washington to make.

“America took quite a while to decide to intervene [with ISIS]. And once we decided to intervene, we decided to intervene in Sinjar. I think there was sort of this feeling that these are such a unique religious minority,” said Harmer. The U.S. has now hit ISIS across northern Iraq, focusing on the area around the Mosul Dam. “With the Shi‘ites, it just gets lost in the Sunni-Shi‘ite conflict. There’s nothing unique about ISIS targeting a Shi‘ite village.” 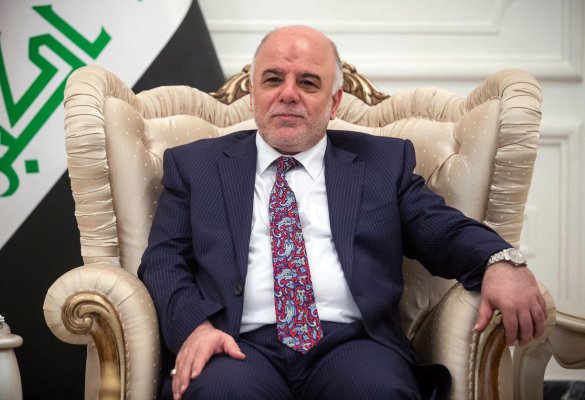 Can Iraq's New Prime Minister Keep the Sunnis on Side?
Next Up: Editor's Pick