At least 87 people were injured early Sunday morning after the largest earthquake to hit California’s Napa Valley in 25 years struck near the Bay Area.

The 6.0-magnitude quake struck at 3:20 a.m. local time near American Canyon, about 6 miles southwest of Napa, at a depth of 6.7 miles. The earthquake is the largest to strike the Napa Valley area since the Loma Prieta earthquake almost 25 years ago, the U.S. Geological Survey said in a tweet:

A Northern California hospital treated more than 87 patients in the wake of the earthquake, the Associated Press reports. Three people were critically injured.

Widespread power outages in Napa and Sonoma were recorded and historic buildings in downtown Napa were damaged, CBS Local San Francisco reports. The town’s library and the historic Chinese laundry building were badly damaged, water mains had burst, and at least two homes were lit ablaze.

The foundation under Highway 37 was damaged between Interstate 80 and downtown Vallejo, and the road was shut down at Sonoma Boulevard to inspect for structural damage. A separate bridge entering American Canyon was damaged and will be closed.

Several injuries have been reported due to broken glass.

“My Office of Emergency Services has been on full activation since early this morning and is working closely with state and local emergency managers, first responders and transportation officials to respond to impacts to residents and critical infrastructure,” Brown said. “These public safety officials are doing all they can to help residents and those living in affected areas should follow their guidance and instruction.”

Some California residents, meanwhile, made the best of the situation:

The USGS said that there is a 54% chance of a strong and possibly damaging aftershock in the next seven days, and a 5 to 10% chance that an earthquake of equal or even larger magnitude will strike in the next week. Weak aftershocks are likely in the coming days.

The causative fault of the earthquake is unknown, but the USGS said it suspected the Browns Valley section of the West Napa fault. 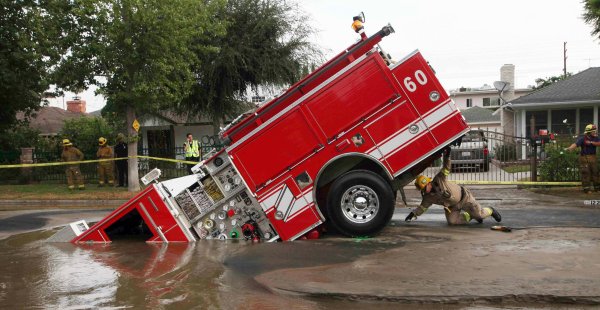