Russia Lashes Out at U.S. 'Monopoly' on Humanitarianism With Aid Convoy to Ukraine

A Russian convoy crosses the Russian-Ukrainian border at the Izvarino checkpoint on Aug. 22, 2014
Rogulin Dmitry—ITAR-TASS Photo/Corbis
By Simon Shuster

On Friday morning, as hundreds of Russian trucks trundled across the border into Ukraine, Russian ambassador to the U.N. Vitaly Churkin gave a briefing to explain why Moscow was sending the convoy without permission from the government in Kiev. The decision had caused such panic in the West that an emergency meeting of the U.N. Security Council had been scheduled Friday afternoon to discuss what Ukraine called a “direct invasion.” Churkin batted these concerns away, and only once gave a hint as to convoy’s larger purpose.

The telling moment came in response to a question from Voice of America, whose correspondent asked Churkin about the claim that the trucks were being used to resupply pro-Russian rebels fighting against government forces in Ukraine. “With baby food?” Churkin countered. In Russia’s version of the story, the trucks are loaded with humanitarian aid, nothing more dangerous than power generators, buckwheat and medicine. But Churkin wasn’t finished. “You are from Voice of America,” he told the reporter, who began to say her press affiliation is irrelevant. “Please, wait for me to say the next thing,” Churkin interjected. “The United States do not have monopoly to humanism, you know? We are all human. So if you are trying to question our humanism, I would resent that.”

The following day, when all the trucks packed up and drove back across the border into Russia, it became clear that breaking the West’s “monopoly” on “humanism” (Churkin meant to say “humanitarianism”) had a lot to do with the convoy’s objectives from the start. It was not meant to resupply the rebels in Ukraine; Russia has been doing that for months without resorting to elaborate diversions and decoys. Nor was the convoy’s sole mission to deliver aid, as many of the trucks were mostly empty. It was rather meant to show that Russia, much like the West, now claims the right to violate the sovereignty of another nation on humanitarian grounds, and there’s not much anyone can do to stop it.

Russia’s been couching its invasion of Ukraine in these terms from the start. On March 18, the day Russian President Vladimir Putin annexed the region of Crimea, he argued in a speech before the Russian legislature that the move was necessary to protect the peninsula’s ethnic Russians, who he claimed were under threat from the “nationalists, neo-Nazis, Russophobes and anti-Semites” who took power in Ukraine in February. It was, in other words, a humanitarian mission to protect an ethnic minority, Putin said, much like the Western bombing of Yugoslavia in 1999 carried out to protect the people of Kosovo from slaughter and persecution.

But Putin’s argument was thin. While Kosovo had indeed been the site of a vicious ethnic conflict, there was not a single documented case of persecution against Russians in Crimea, nor of neo-Nazis taking power in Kiev. But Putin insisted on the parallel. For the West to claim that Kosovo and Crimea are different, he said, “is not even double standards; this is amazing, primitive, blunt cynicism. One should not try so crudely to make everything suit their interests, calling the same thing white today and black tomorrow.”

As the convoy of Russian trucks prepared to cross into Ukraine on Friday, Moscow brought similar arguments to bear. Churkin pointed out that the U.N. Security Council in July had passed a resolution allowing for humanitarian aid to be delivered to rebel-controlled parts of Syria without the government’s consent. “We cooperated with that,” Churkin said. “So I don’t see how with a straight face they can argue against this move of Russia.” The convoy to Ukraine, he argued, was simply following the precedent that the West had set in Syria a month ago.

The apparent pleasure Russia takes in calling out such double standards was, of course, not the only purpose of the convoy. Many civilians in eastern Ukraine are indeed desperate for humanitarian assistance, having been cut off from electricity and water supplies for weeks and often running short on food. So the Russian aid was certainly welcome in the besieged city of Luhansk, which Ukrainian forces have been bombarding for weeks.

But the suspected military aims of the convoy were badly overblown. On Saturday, the Ukrainian security council claimed that before returning to Russia, the trucks were being used to haul away equipment from Ukraine’s weapons plants, including a bullet factory in Luhansk. This wouldn’t make a lot of sense. Not only does Russia have little need for Ukrainian bullets, but pro-Russian rebels have been in control of those factories for months. If they wanted to dismantle and send them away to Russia, they could have done that easily and quietly, without attracting the scrutiny that has followed Russia’s humanitarian convoy all along its winding path to Ukraine.

If the convoy did have a military purpose, it would likely have been to act as a tripwire for the Ukrainian military. Russia could simply have parked the trucks near the rebel positions in Luhansk, and if Ukraine’s cannons had destroyed them, Russia would have a fresh excuse to invade. The risk of triggering such a counteroffensive would have discouraged the Ukrainian army from firing its favorite weapons in the area — the notoriously inaccurate multiple rocket launchers it has been using to fight this war. The army’s advance on the city could thus have been halted, and the conflict temporarily frozen in place. But by ordering the trucks to pull out of Ukraine on Saturday, Russia robbed the rebel fighters of this vital military advantage.

Instead, Russia has decided to use the trucks to set another precedent. If the West can cite humanitarian concern as the reason for bombing Yugoslavia, then Russia will use it as an excuse to invade Crimea. If the West can send aid to Syria without asking the government, then Russia will do the same in Ukraine. It hardly matters that these crises and conflicts bear little resemblance to one another or that Russia has done a great deal to fuel Ukraine’s crisis in the first place. What matters to Russia is the ability to hijack a well-worn Western narrative that Russia has both resented and envied for years. Now, with this convoy of half-empty trucks, Putin has once again shown that he can harness the language of humanitarianism in excusing interventionism. It isn’t his first time, and it probably won’t be his last. 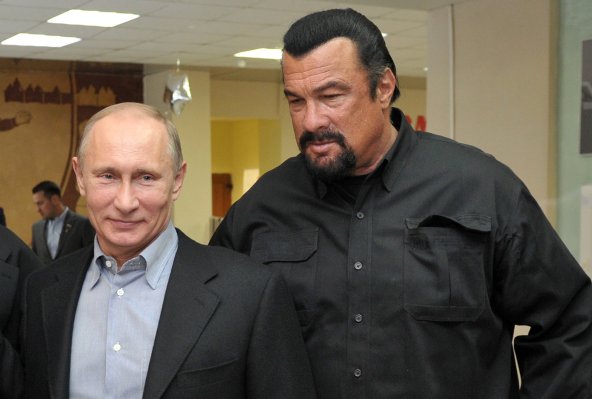 Hollywood Stars Say Thanks But No Thanks to Russia
Next Up: Editor's Pick