Outlander Recap: Claire Discovers the Folkloric Key to Her Escape

Things are getting intense on Outlander, and by “things,” I mean Claire Randall’s heaving bosom, which is literally begging to be unleashed all over the Highlands’ verdant pastures. Last week, Claire’s plan to go back to the future failed when she was made an official prisoner of Castle Leoch, and this week she spent most of her time finger-wagging, being wistful, and facing off against the evil demons who roam Scotland.

But before parsing through Claire’s life as a sexually charged sassenach, Outlander‘s third episode gifts us with a flash to the future, wherein Claire’s historian husband bids her farewell as she leaves for the front lines. Because yes, it’s Claire — not Frank — who occupied the trenches during World War II, and this reversal of traditional roles sets the viewer up for Claire’s insistence on challenging gender norms in 18th century Scotland. You know, where she enjoys life as a glorified witch-doctor / professional groper of shirtless man-breasts.

While Claire spends much of this episode diligently asserting her feminist beliefs (and getting to know an entirely different brand of feminism), we’re also re-introduced to the omnipresent supernatural, which — unlike almost every male on this show — might be an adversary that Claire can’t outwit. With that in mind, let’s take another trip to the rippling moors of Outlander, shall we?

Thanks to Claire humble-bragging about the fact that she’s a nurse every five seconds, she spends most of her time in a dank infirmary — the very same infirmary where Future Frank performed oral sex on her just days earlier. But rather than bemoan her new role as Castle Leoch’s doctor, Claire partakes in a cheerful montage of wound-tending (set to a Celtic jig), and happily conducts the unfortunate task of massaging Colum MacKenzie’s naked backside to ease the pain of his pycnodysostosis. Though the job is fifty shades of horrifying, it should be noted that Claire in a position of physical control over Colum. He might be her captor, but even his most demeaning treatment of Claire renders him physically vulnerable.

As a reward for Claire’s compliance, Colum invites her to a concert, which is essentially an opportunity for her to dive into yet another love triangle — this time between Jamie and Laoghaire Mackenzie, the damsel in distress whom he valiantly saved from a public beating last week. Laoghaire is obviously in love with Jamie (get in line, friend), but instead of Claire following through with her promise to set them up, she and Jamie get drunk and wander off to “dress his wound.” By now we know this is just an excuse for Jamie to muse about flogging while Claire strokes his shoulder, but the highlight of this particular bonding session is Jamie staring deeply into Claire’s eyes. They’re the windows to her soul, after all, and as a flag-waving feminist, Jamie knows that beauty is only skin deep. He’s so wise, despite his floggy malaise!

Claire Denounces Demons, Comes Down With An Acute Case of Love Sickness

Turns out everyone in the 18th century is full-on obsessed with demons, especially those that reside at the ruins near Castle Leoch. Apparently, this place is swarming with supernatural townies who love nothing more than possessing children, and Claire decides to protest an exorcism that’s being performed on one such child — the nephew of her friendly maid, Mrs. Fitz. Unfortunately, Claire’s attempt to save this bonny lad is thwarted by woman-hating Father Bain, and she fails to overcome the confines of her gender and seize control of the situation as she’d hoped. But is her failure really Father Bain’s gain? Or is Claire’s real foe in this situation the ever-intangible supernatural forces at play? Surely, if she can find a logical answer to Castle Leoch’s demon problem, she can find a logical answer to her own time travel conundrum.

More on that later, because important things are afoot: Claire catches Jamie kissing Laoghaire in a hallway. The good news? Jamie probably isn’t a virgin (I was worried). The bad news? He’s betraying his core belief system. Laoghaire obviously represents everything Claire doesn’t: she’s innocent, naive, definitely hasn’t read anything by Virginia Woolf, and most importantly, she’s all wrong for Scotland’s resident dreamboat. And considering that this semi-mulleted hero spent last week being the world’s best feminist, I’m slightly surprised that he’d so quickly fall into caricature by philandering with Laoghaire solely because she’s attractive. What about her personality, Jamie? WWBFD (What Would Betty Friedan Do)?

After mooning over Jamie atop yet another buttress, Claire visits her friend Geillis and meets Arthur, a flatulent fellow who dispenses justice among the locals. This is a learning moment for Claire, as she’s introduced to a conflicting brand of feminism when Geillis uses her “wiles” to convince Arthur not to chop off a little boy’s hand as punishment for stealing. While Claire attempts to reason with Arthur as one intelligent person to another, Geilles uses prototypical gender roles to her advantage and succeeds in changing his mind (though the poor boy still gets his ear nailed to a post). The question is, will Claire abandon her scruples and embrace new-wave feminism?

Claire doesn’t have to ponder this issue for too long, because Jamie wanders in and (after releasing the boy’s ear) whisks her off to the possessed ruins near Castle Leoch so they can discuss demons. (Not to be confused with flogging, which was shockingly not discussed.) It only takes Claire about five minutes to realize that Scottish children are being “possessed” thanks to their consumption of lily of the valley, which they binge-eat like it’s going out of style. Claire’s discovery not only shows that she’s smarter than her haters, but also that she’s rationalized the pervasive supernatural element in this episode. She’s found an explanation for demons, and now she’s free to find one for her own inexplicable journey through time.

Claire stumbles upon the answers she’s looking for after saving Mrs. Fitz’s nephew, and though she initially fears that she’ll forever be Castle Leoch’s “miracle worker,” she comes to an epiphany while listening to a folk song about — you guessed it — time travel. The key to Claire’s escape according to folklore? Returning to Craigh na Dun at night and touching the stone that whisked her to the 18th century. Claire might not know what she’s up against, but she’s ditching Castle Leoch with or without permission from her captors. Way to reclaim your agency, Claire, but I can’t be alone in hoping you stay long enough to educate Jamie in the ways of 20th century sex. Who’s with me? 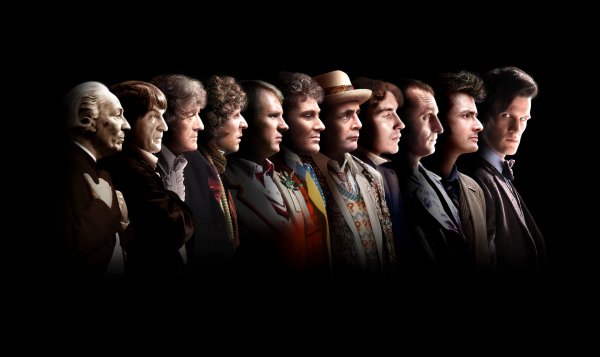 See the Other Roles Played by the Doctors of Doctor Who
Next Up: Editor's Pick