When I was 8, my favorite thing to do after school was to visit the set of My So-Called Life. My mom, who created the show, had to be there all the time, so I’d visit her on days when a babysitter could drive me or when my dad was shooting scenes as Angela’s grandfather. I’d play behind the scenery, do my homework in the unused fake school hallway, and plunder the craft service snack table. I loved reading the scripts and watching rough cuts of the episodes. A lot of what I saw went over my head, but I could totally identify with Angela’s intense crush on Jordan Catalano. I was already boy crazy, pining after classmates, camp counselors, my friend’s older brother and the bowl-cutted hunks of Tiger Beat.

So it was no surprise that I swooned over Wilson Cruz, who played gay teenager Rickie on MSCL. I was in awe of all the actors—even 14-year-old Claire Danes seemed impossibly grownup to me—but felt especially thrilled when warm, funny, magnetic Wilson would chat with me between scenes. “I’m gonna marry him!” I confided in my mom one day. She smiled. “That’s so sweet, honey, but you know, Wilson is gay.”

I understood what that meant. My parents, who had many gay friends, had explained it to me in a simplified way. I’d known the character of Rickie was gay, but it hadn’t occurred to me that Wilson might be too. (I decided I could still fantasize about our wedding anyway.)

Many people fear exposing kids to the idea of sexual orientation or gender identity when they’re “too young”—though those very kids may already know they’re attracted to people of the same sex or that their gender doesn’t match what they were assigned. But my parents didn’t think twice about broaching the subject or letting me watch MSCL. Rickie’s storylines on the show opened my eyes to something I was beginning to see more and more at elementary school: homophobia. I became a tiny advocate, chastising friends when they used “That’s so gay!” as an insult. But I didn’t yet realize that I was queer too.

When I unexpectedly fell for a girl in high school, I was thrown for a loop. By that time, I could appreciate more of the nuances of MSCL, like the fluidity of Rickie’s sexual and gender expression. He starts out identifying as bi before eventually coming out as gay; he wears makeup but experiments with a traditionally masculine look on Halloween; he tries using both the girls’ and the boys’ bathroom at school but doesn’t quite fit in either. These details felt authentic to me as a teenage queer in flux, trying on different labels to find what felt right. It reassured me to know not everyone’s journey began with “I always knew.”

But as much as I related to Rickie, his story was very different from mine. In a particularly emotional episode, he is beaten and forced out of his home on Christmas. That storyline was inspired by aspects of Wilson’s real experience as a teenager. As I struggled to define my sexuality, the one thing I never had to worry about was how my parents would react. By talking with me at a young age and allowing me access to LGBTQ stories, they’d shown me I could count on their unconditional acceptance when I’d need it most. I feel incredibly lucky, and sometimes guilty, for having a painless coming-out experience when so many face abuse or rejection from their families, as Wilson did. Even subtler forms of disapproval, like parents who insist “It’s just a phase,” have had deep psychological impact on friends of mine. I cannot imagine how isolating it must be to have to hide who you are from those closest to you. Yet it’s a commonplace reality for LGBTQ youth—a group with disproportionately high rates of homelessness and suicide.

That’s why characters like Rickie matter so much. They can be a lifeline for viewers who may not be able to talk to anyone about what they’re going through. And they can help change minds by humanizing those who are different. It’s inspiring to see how much the TV landscape has shifted in the 20 years since MSCL first aired. Rickie helped pave the way for LGBTQ characters on Glee, Orange Is the New Black, Degrassi, The Fosters and many more shows. And Wilson Cruz (who was eventually able to reconcile with his father) is helping shape that landscape as an actor and national spokesperson for GLAAD. It gives me hope that we’ll continue to break ground, bringing even more diverse stories to the screen and moving toward a culture where more kids can feel as safe coming out as I did.

Savannah Dooley is a screenwriter best known for her work on ABC Family’s Huge. 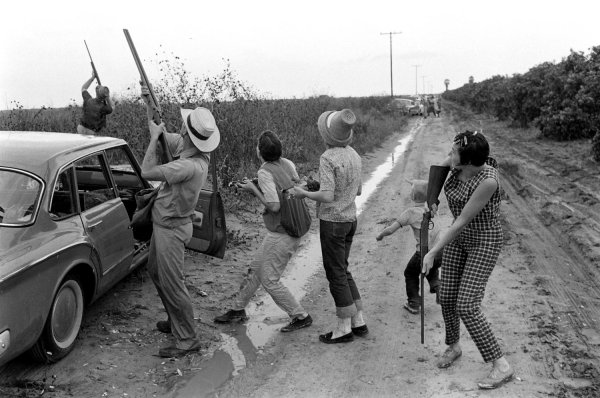 Gunning for White-Winged Doves, 1961
Next Up: Editor's Pick