The Arizona gubernatorial primary election is just four days away, and for months now, Arizonans have been hearing the six Republican candidates on the ballot fight over who can do one thing best: stop illegal immigration.

Arizona has long been at the center of the national immigration policy debate, especially this year as record numbers of unaccompanied minors crossed the Mexico-United States border. Current Republican governor Jan Brewer—who championed the state’s controversial SB1070, or “show-me-your-papers,” law—is term-limited, and the race to take up her mantle has been feisty. Candidates’ soundbites at a gubernatorial debate in late July included Ken Bennett, Arizona’s current secretary of state, saying, “a good neighbor doesn’t hop your fence, break into your garage, and live out of your freezer;” former California Congressman Frank Riggs adding that he would have credibility with Congress because he knows where the men’s room is at the Capitol; and Scott Smith, former mayor of Mesa, Arizona, comparing his competitors’ promises to carnival games.

The Republican nominee will face Democratic challenger Fred DuVal, former president of the Arizona Board of Regents, who has been endorsed by Gabby Giffords and Mark Kelly. Republican campaign advertisements, predictably, have centered on who would best protect the border. Here’s a roundup of the topline:

Ken Bennett, the Arizona secretary of state who asked Hawaii officials to verify President Barack Obama’s birthplace in 2012 before putting him on the state’s presidential ballot, says he’s a nice guy, and a tough one:

Christine Jones, attorney and former GoDaddy executive, got a boost this week from GoDaddy founder Bob Parsons, who contributed $1 million to a PAC backing her campaign:

Andrew Thomas, former Maricopa county attorney, adds that he has “stood up to the gay lobby:” 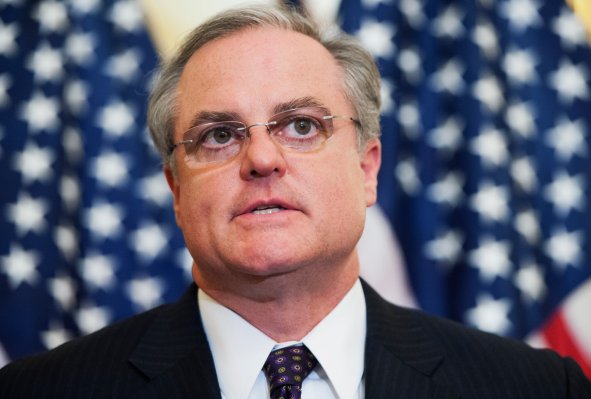 Senate Democrat Runs on Obamacare in Surprising New Ad
Next Up: Editor's Pick