A Russian border guard opens a gate into the Ukraine for the first trucks heading into the country from the Russian town of Donetsk, Rostov-on-Don region, Russia, Aug. 22, 2014.
Sergei Grits—AP
By Mirren Gidda

Russia sent dozens of aid trucks into eastern Ukraine on Friday without the Ukrainian government’s approval, the Associated Press reports. This show of defiance, which a Ukrainian security chief called a “a direct invasion,” has increased fears of conflict between Russian forces and the Ukrainian military.

A witness told Reuters that 70 of the 260 white trucks left a Russian convoy that had been stalled at the border for over a week. The breakaway column crossed the border and headed for the rebel-held area of Luhansk, accompanied by some Ukrainian separatist fighters.

The convoy was being held at the border while Kiev and Moscow negotiated the terms of the crossing and discussed the trucks’ contents and the role the International Committee for the Red Cross should play. Both sides had agreed the Red Cross would accompany the vehicles, but an unnamed Ukrainian official told the Interfax news agency that the 70-strong convoy traveled without ICRC escort.

Ukrainian and Western officials are worried Russia may use the convoy as an excuse for Russia to directly intervene in the ongoing conflict in eastern Ukraine. Moscow, however, has dismissed this as preposterous, saying instead that Friday’s border crossing happened after it had grown impatient with Ukrainian delays.

“All excuses to delay sending aid have been exhausted,” said Russia’s foreign ministry in a statement. “The Russian side has taken the decision to act.” The ministry further warned at any attempts to disrupt the convoy. A spokesperson for the Kremlin said Russian President Vladimir Putin has been told of the convoy’s advance.

Russia has repeatedly denied accusations that it has been sending weapons and experts to help separatist rebels in eastern Ukraine. The conflict has intensified around the cities of Donetsk and Luhansk recently, with fatalities rapidly rising. All told, the struggle between Ukrainian troops and rebels loyal to Russia for control of eastern Ukraine has been raging for four months. The death toll stands at over 2,000, and many residents are stranded without food, medicine or clean water. 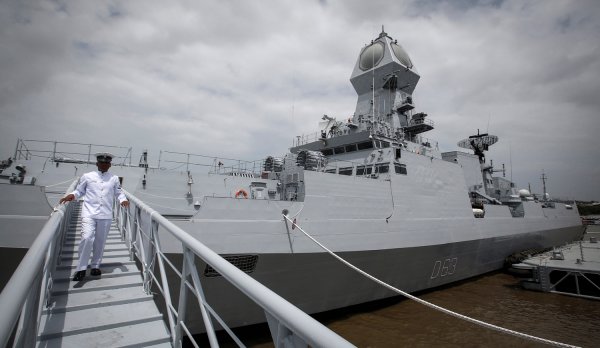 India Shows Off New Warship Amid China Rivalry
Next Up: Editor's Pick