National Guard Pulled From Ferguson After Night of Relative Calm

Soldiers from the Missouri National Guard stand in front of their Humvee vehicle outside a Burger King restaurant as they man an entrance to a temporary police command center in Ferguson, Missouri on Aug. 20, 2014.
Luke Sharrett—Bloomberg/Getty Images
By Noah Rayman

Missouri Gov. Jay Nixon ordered the National Guard to withdraw from Ferguson, Mo., on Thursday, as tension in the area appeared to cool off Wednesday evening for the first time in nearly a week.

“As we continue to see improvement, I have ordered the Missouri National Guard to begin a systematic process of withdrawing from the City of Ferguson,” Nixon said in a statement.

Nixon dispatched the National Guard to the St. Louis suburb Monday to help respond to protests that have rocked the area since a white police officer shot and killed an unarmed black teenager, Michael Brown, on Aug. 9. Nixon said the National Guard’s mission would be limited to protecting a police Unified Command Center near the site of nightly protests, which he said had been attacked during previous violence.

Ferguson’s protests have been mostly peaceful during the day, but have generally erupted into violence at night. However, people demonstrated in relative calm Wednesday, with rainy weather likely contributing to a smaller turnout among demonstrators. Earlier in the day, U.S. Attorney General Eric Holder arrived in Ferguson and met with Brown’s family.

The National Guard had been operating under the authority of Missouri State Highway Patrol, which was charged with leading security in the city after the heavily-equipped local police force on the scene came under increasing scrutiny for its tactics.

“I greatly appreciate the men and women of the Missouri National Guard for successfully carrying out the specific, limited mission of protecting the Unified Command Center so that law enforcement officers could focus on the important work of increasing communication within the community, restoring trust, and protecting the people and property of Ferguson,” Nixon said. 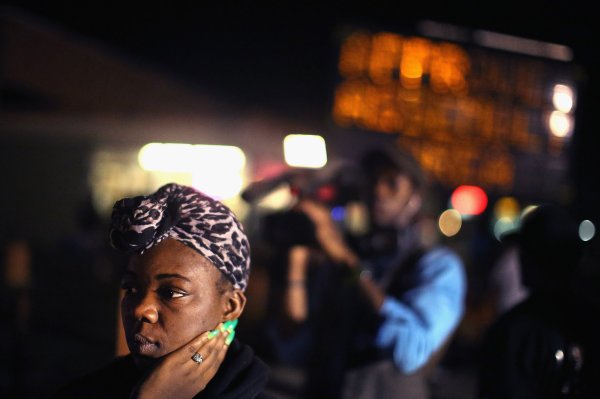