How Some People Are Surviving the Deadliest Ebola Outbreak in History

Dr. Kent Brantly, who contracted the deadly Ebola virus, stands with wife Amber during a press conference at Emory University Hospital in Atlanta on Aug. 21, 2014
Tami Chappell—Reuters
By Alexandra Sifferlin

Ebola is a nasty virus, but contracting it isn’t always a death sentence.

The current outbreak is immense — the worst in recorded history — and aid organizations in West Africa are stressing the need for more people on the ground, not to mention additional supplies and space.

But in a rare instance of positive news on Thursday, it was announced that two Americans who became infected in Liberia and were evacuated to an Atlanta hospital for treatment had been discharged and are now virus-free. One of them, Dr. Kent Brantly, appeared healthy while speaking at a press conference.

Ebola’s fatality rate in the current outbreak is slightly over 50% — with 2,473 cases and 1,350 deaths — and previous outbreaks have hovered up to 90%. So it may seem hard to understand how someone can survive the disease, which attacks people’s organs and thins blood vessels. But the physicians at Emory University Hospital, where the American patients were treated, tell TIME that even though Ebola’s death rates are frankly terrifying, it’s key to remember that those are in countries — Guinea, Liberia and Sierra Leone — with comparatively weak health care systems. Multiple patients are kept together in a single space and health care workers have neither enough protective equipment nor resources to provide the supportive care that patients need — like isolation, clean linens and replenished fluids and electrolytes.

Still, some people in the U.S. and elsewhere manage to survive the deadly disease.

There’s no cure or treatment for Ebola, but some drugs are being tested. That includes ZMapp, which Brantly and Nancy Writebol received in Liberia. But, their physicians say since they were the first human patients to get the drug, there’s no way to tell what impact it had.

Experimental drugs aside, what doctors can provide Ebola patients is supportive care, like monitoring their heart rate, blood pressure and breathing, as well as replenishing fluids, which can help keep the body as stable as possible so it can fight the virus. (A lack of protective equipment and high demand make this type of care difficult in some of the hardest-hit areas of the outbreak.)

When a person is infected with a virus, their immune system starts to create antibodies to attack it. If the person is strong enough and their body sustains that strength long enough, their immune system can eventually neutralize and clear the virus on its own. Ebola can be detected through blood tests, the results of which only take a day or two to get back. The doctors at Emory said they were able to determine through both blood- and urine-diagnostic tests — and with the help of the Centers for Disease Control and Prevention — that the virus was no longer in the patients’ systems and that they were both symptomless for at least two or three days.

Now there are questions about whether they are carriers, or if they could relapse, or whether they are still infectious. The doctors have confidently said no to all those questions. “The general experience is that once they have survived — especially this far into the disease — they are not contagious, they don’t relapse and they don’t spread the virus to anyone else,” Dr. Bruce Ribner of Emory University Hospital said in the press conference. “We have no evidence of a carrier state for this disease … We anticipate [they will have] immunity to this virus.”

Thanks largely to the quality of care they received, Brantly and Writebol are alive, giving hope that the virus can be conquered in patients with pointed care. But that type of assistance isn’t always available in the areas where Ebola is spreading fastest. “Please, do not stop praying for the people of Liberia and West Africa,” Brantly said on Thursday, in a plea for the public not to forget those who won’t have a recovery similar to his. 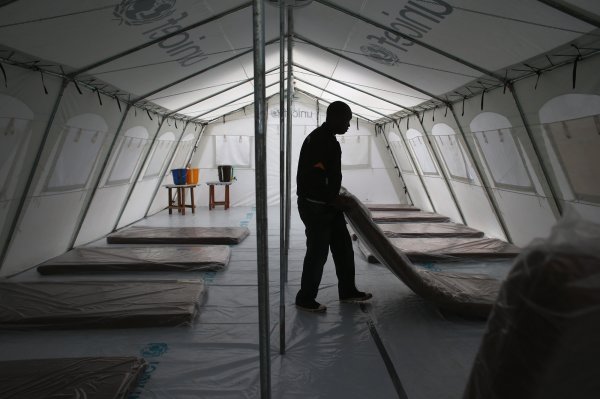