Should We Forgive Marvel for That Awful Spider-Woman Cover ?

Oh, Marvel, we had such high hopes.

In recent months Marvel has announced that a woman will wield Thor’s hammer for the foreseeable future and revealed at the “Women of Marvel” panel at San Diego Comic-Con that there would be a new Spider-Woman comic series come November. Female fans rejoiced that major characters in the Marvel universe would finally look like them. It was a smart business move for the comic book company: 47% of comic fans are female, and women make up 62% of the Facebook fans of female comic characters (including Black Widow, Elektra and She-Hulk), according to Comics Beat.

But after building up so much good will with the ladies, they had to go and screw it up.

And courting those female fans means big bucks. Studios are increasingly relying on comic books as source material for summer blockbusters, and studies have shown that movies with empowered female characters do better at the box office. That, and the success of films like The Hunger Games, Divergent and Lucy, suggest that a female superhero film will do well. As Marvel develops more female characters, it’s not just about comic books: movie ticket sales are also on the line.

Sony just inked a deal with Marvel Comics to put out a female-led superhero movie based on a character from the Spider-Man universe (like, I don’t know, Spider-Woman?). This may have been an alternate cover, but it’s launched 1,000 think pieces, the conclusion of which has been: “This is what happens when men draw female characters.” If this is how Spider-Woman is envisioned for the comics, female fans shouldn’t get their hopes up for the movie version.

Kevin Feige, the head of Marvel Studios, recently said that he thought there ought to be a female superhero film. And yet he hasn’t green-lit one, despite the fact that fans are practically begging for a Black Widow movie starring Scarlett Johansson—a spinoff from the Avengers franchise. Perhaps he’s waiting to see how Sony and Marvel’s yet-to-be-named super-heroine will do first, which is why drawings like this one matter.

So do better, Marvel. 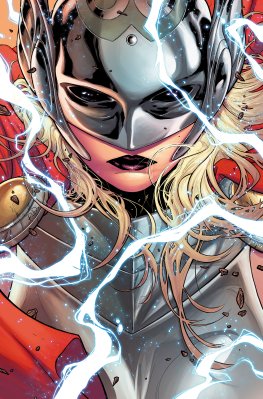 Marvel Comics Writers Explain Why They're Making Thor a Woman
Next Up: Editor's Pick