Soldiers carry a coffin with the remains of a Malaysian victim from Malaysia Airlines Flight 17, which crashed in Ukraine, during a ceremony at Kuala Lumpur International Airport on Aug. 22, 2014
Manan Vatsyayana—AFP/Getty Images
By Per Liljas

Malaysia came to a standstill Friday morning as the first remains of its nationals killed on the downed Malaysia Airlines Flight 17 were received with a minute of silence.

Relatives gathered with political dignitaries on the tarmac of Kuala Lumpur International Airport for a solemn reception of the caskets. Others waited at domestic airports across the country, to which some of the bodies would be forwarded.

They were also waiting a little over a month ago, when the ill-fated jetliner was scheduled to land, but the difference was that then their loved ones were alive, and they were expecting to be reunited with them for the Eid al-Fitr festivities.

“Although we are sad, we thank God that the government has taken care of this process in such a good way,” says Zulrusdi bin Haji Mohamad Hol, who was waiting for the remains of his cousin Ariza Ghazalee and her son in the city of Kuching. “We hope maybe the remains of the rest of the family will arrive on Sunday.”

For a long time, it was not sure whether they would get them back at all.

On July 17, when MH 17 was shot down over Ukraine, 298 people were killed. Two-thirds of the passengers were from the Netherlands, where the flight originated, and 44 were Malaysians — the second largest nationality. But the horror in Malaysia was aggravated by the fact that the incident occurred only four months after another Malaysia Airlines aircraft, MH 370, disappeared without a trace over the South China Sea.

People demanded an immediate recovery of the bodies, not least because of the Islamic requirement of prompt burials. Instead, they were shocked to hear that the crash site was being raided and international investigators obstructed, by the same pro-Russian rebels who were widely blamed for the missile strike.

“I’m very angry,” Zulrusdi said at the time. “They’re inhumane, they don’t understand. First they murder our relatives, then they keep the corpses with them.”

It therefore came as a great relief when a Malaysian delegation to Ukraine managed to negotiate with the separatists for the safe removal of bodies from the scene. And yet: “There is no feeling of closure, since people still don’t understand how two planes could be lost in only a few months,” says James Chin, professor of political science at Monash University Malaysia in Kuala Lumpur.

He says that Aug. 22, declared the country’s “national day of sorrow,” will at least be an opportunity for people to pay their respects to the victims. “Now we can move on to the second stage,” he adds, referring to the criminal investigation led by a Dutch team. “Everyone is looking forward to the release of their interim report at the end of this year.”

Ten Dutch prosecutors and 200 police officers are currently piecing together the case. It’s the biggest criminal investigation ever conducted in the Netherlands, although it hasn’t been confirmed what the exact charges are.

“Of course murder, but we also have the crime of ‘wrecking an airplane’,” Wim de Bruin from the Dutch prosecution service told BBC. “And we could use international criminal law — that would mean possible charges of war crimes, torture and genocide.”

When a Pan Am plane was blown up over Lockerbie, in Scotland, in 1988, it took three years to finish the investigation and another seven for the trial. In contrast to MH 17, that incident didn’t take place over a region wrecked by war — a fact that considerably complicates the current probe.

While the recovery of the black box, photos from the scene, satellite images and information from air-traffic control have made them optimistic of publishing a preliminary report already within two weeks, the international team of 25 air-crash investigators still hasn’t been able to access the crash site. Counterterrorism experts fear that doing so might put the effort of retrieving the bodies at risk.

Meanwhile, a second aircraft carrying caskets is expected at Kuala Lumpur International Airport soon. But several Malaysian victims remain unaccounted for, since only 30 have been identified so far. Zulrusdi says he will keep praying that they will all return, and that peace and justice can be found.

“Of course justice must be done,” he says, “not only for us, but for our country and for the world.” 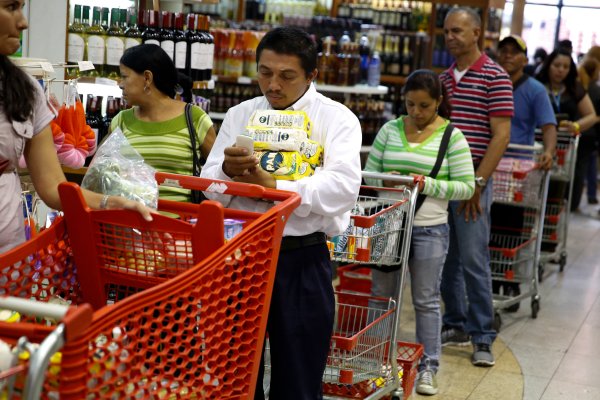 Venezuela to Have Mandatory Fingerprinting at Grocer
Next Up: Editor's Pick