The New Rules of Viral Fundraising

That’s what made the ALS Ice Bucket Challenge–in which millions of people shared videos of themselves getting doused with ice water and then demanding that others do the same, donate to fight the disease or both–all the more eye-opening. From July 29 through Aug. 20, the ALS Association was able to raise more than $31 million to fund research to find a cure for amyotrophic lateral sclerosis, a fatal disease that attacks the nervous system. That’s more than it raised in 2012–the entire year.

Presumably, every charity in America is trying to mine that success for insights. “We think about these issues all the time,” says Margaret Anderson, executive director of FasterCures, a think tank focused on finding treatments for the thousands of diseases that, like ALS, still lack cures. “Why are we able to dump ice on our head and potentially write a check now but not consistently otherwise?”

There is no magic formula (although it certainly helps to have a worthy and accessible cause, like ALS). But experts agree the Ice Bucket Challenge has revealed several surprising truths about viral fundraising, many of which are likely to be heeded in the months and years to come:

The ALS Association didn’t invent the Ice Bucket Challenge, which has been used to raise funds for other charities. But once a Boston-based ALS sufferer, Peter Frates, encouraged his large network of friends to participate in support of his disease in July–and ALS Association execs started to notice an uptick in donations–the organization quickly threw its support behind the challenge. Inspired by the organic build, thousands of regular people–and many celebrities–began to follow suit.

The Ice Bucket Challenge is the chain letter in reverse: you pass on the giving. By setting clear parameters–get challenged, accept, upload a video, call someone else out and give them 24 hours to donate–it creates a sense of urgency and spontaneity that’s not present during black-tie dinners or charity walks.

Iggy Azalea dousing herself in a bikini, Bill Gates engineering a special water dumper–the challenge’s visual component fostered a sort of casual one-upmanship, especially once celebrities started doing it, knowing they had large audiences. “It was fantastic for awareness of the disease,” says Ceil Folz, CEO of the Vail Valley Foundation and a participant. “It allowed for people to be personally connected.”

According to Ken Berger, CEO of Charity Navigator, most donations are still made by check, in part because older people, who have more money, still prefer to write them. But the Ice Bucket Challenge–which raised a large portion of its funds digitally–may hasten a shift to more collection online and through texts, which are faster and more frictionless.

The real need for the ALS Association and other disease-focused charities is to be sustained on an ongoing basis; after all, it’s going to take a lot more than $31 million to find a cure. “In that sense, the Ice Bucket Challenge is the worst kind of giving, because it’s all impulse,” says Berger. For the ALS Association, the challenge now is to sustain its momentum by showing donors that their money is making a meaningful difference against a real and awful affliction–though more shows of celebrity support won’t hurt either. 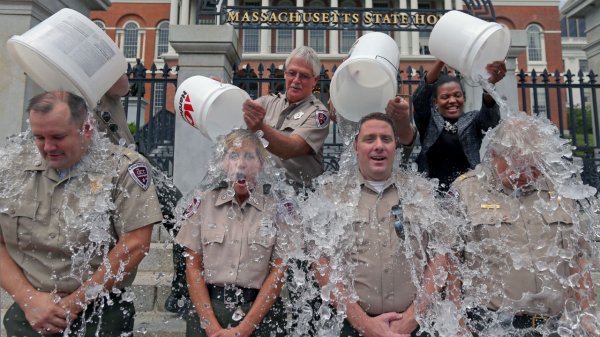 It’ll Be A Cold Day: The Ice Bucket Challenge
Next Up: Editor's Pick