If you follow any parents on Instagram or Facebook, you’ve seen something like the snapshot Wyatt Neumann posted last year. His 2-year-old daughter, Stella, completely naked, jumps on an unmade motel bed, joy blooming across her face.

You may have even posted a photo just like it of your own kid. Chances are, though, you didn’t get comments like the ones Neumann did: “This guy is a class A d–k.” Or this one: “PEDOS CAN EASILY FIND THESE PICTURES AND JACK OFF TO THEM.”

Or maybe you shared a snapshot of your little one, frolicking outside, lifting her dress — in that unselfconscious way every toddler does. Neumann, a professional photographer, posted these and more on Instagram. Many of the ensuing comments were profanity-laced. One said: “I want to puke. The nude photos are gross and disturbing.”

These photos, and more like them, are the centerpieces of Neumann’s latest solo show at the Safari gallery in Soho, New York, which runs through the end of the week. Titled “I Feel Sorry For Your Children,” the exhibit documents a 12-day road trip he took with Stella last year, from Zion National Park to New York City. He accompanies each photo with his original Instagram caption — usually with the hashtag #dadlife — and a comment from a complete stranger. It is an extreme iteration of the more judgmental and moralistic strains we encounter in modern parenting.

And yet, the photos raise an interesting question about how much we share about our kids on social media. Neumann happens to be an award-winning fine art photographer with commercial clients like Reebok and Visa. But you wouldn’t necessarily have that context if you were to stumble upon his photos online somewhere for the first time. Pictures like the one of his daughter sitting between his legs in a bathtub might trigger a twinge of discomfort for the candidness and intimacy they capture. It’s a beautiful image, but does it belong in a public venue frequented by perverts and prudes alike? Here’s where I land: However uncomfortable a given photo may make me feel, I would be even less comfortable telling someone they can’t post it.

The roadtrip photos — Stella in her carseat; Stella using a portable training potty at a roadside pitstop; Stella eating barbeque — were first posted to his Instagram account. His friend Claire Bidwell Smith, author of the best-selling memoir “The Rules of Inheritance,” told her own Instagram followers to check them out. From there the images made their way to the online message board Get Off My Internets.

And then came the hate: Parenting trolls descended with a vengeance, flagging so many of his pictures that his account was suspended mid-roadtrip — 6,000 photos gone — but not before flooding his posts and inbox with hate speech and insults.

“What they wanted me to do was stop posting photos,” he told me at his exhibit which opened last month. “They wanted to take away my ability to do that. The more this conservative, puritanical, fundamentalist ideology starts to permeate our culture [the more] it’s compressing our ability to express ourselves. Rather than retreat, I pushed forward and turned it into a beautiful art show.”

Anyone with a child has hundreds of these kinds of snapshots on a smartphone. I do. We all have our own rules about how much we’ll share of our kids’ lives online. I certainly don’t post any photos of mine undressed or, for that matter, doing anything I think they’d find compromising in the future. But they’re older than Stella. When they were younger I might have shared a bathtub shot or two, or one of them copping a potty-training squat. Harmless stuff. But even then, it would have most likely been on Facebook where at least I am given the illusion that I can control who has access to the pictures.

These days, whenever I take a photo of my kids, ages 6 and 9, they invariably say “Don’t put that on Facebook!” or “Let me choose the filter before you put it on Instagram.” I let them call the shots, most of the time.

Neumann, whose own father died before he could get to know him, errs on the side of openness. He’s creating an archive for his kids and who am I to judge him for sharing it? “I was raised on a hippie commune,” he says. “I grew up naked. My life with my father is something I lived through in photos. I got to know him through the artifacts he left.”

It’s painfully obvious that Neumann not only loves his children, but is also a present, involved and nurturing father. Author Bidwell Smith thought she had made that point when she shared her friend’s pictures.

“People box parenthood into such a small realm of what we’re supposed to be with our children,” she told me. “Wyatt blows that up. His work is brilliant and gorgeous–the way he captures childhood in this fleeting way. Kids are free and magical and not inhibited by the cultural boundaries we all are. It made me sad that that distinction wasn’t made in their minds.”

The photos he shares of Stella are striking in their intimacy and universality. His wife, Jena Cordova, told me that she would feel lucky to have one such picture from her own childhood; Stella and her older brother Takota have thousands. (I am granted an interview with Stella, but she is feeling shy and buries her face into her Dad’s neck. Also, there is a smartphone nearby streaming cartoons.)

Like the comic who says what everyone is thinking but too scared to utter out loud, Neumann makes photographs of his kids as timeless as they are personal: his daughter looking tired, his daughter ecstatic, sultry, bored, human.

“It’s very confusing to me,” says Cordova. “Even when I didn’t have children, my mind wouldn’t have gone there. It makes me sad for a lot of people that it would even cross their minds.”

In that respect Neumann’s photos are something of a Rorschach test: You see in them what you want to see. I see a doting dad who happens to be a photographer with a killer eye — and, yes, a desire to share. Haters, as they say on the Internet and playgrounds everywhere, are gonna hate. 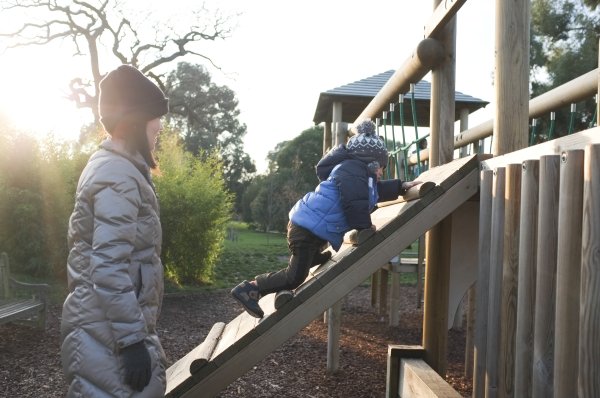 Millennials Are Selfish and Entitled, and Helicopter Parents Are to Blame
Next Up: Editor's Pick